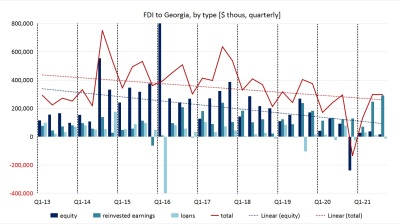 Foreign direct investment to Georgia slightly recovered from the subdued levels in 2020, rising close to $300mn in the second and the third quarters of 2021, but, overall, it remains at a comparatively low level of 3.6% of GDP ($594mn) in the rolling four quarters as of the end of September.

Detailed data revealed by the statistics office Geostat suggest that a large part of the FDI was actually retained earnings generated by the two major banks TBC and Bank of Georgia, controlled by UK-registered holdings. In the second quarter alone, the overall FDI was revised upwards by $64mn as the result of supplementary profits reported by “the financial sector”.

Furthermore, most of the FDI in recent quarters was generated by reinvested earnings, as opposed to new equity investments. Thus, the equity investments accounted for minus 25% of the total FDI in the last four quarters as of September and only $17mn in Q3. More precisely, the foreign investors have reduced their equity contribution in the Georgian companies.

In contrast, the reinvested earnings – namely, profits generated by existing FDI companies and not distributed as dividends – accounted for 125% of the FDI for the period.

COMMENT: Georgia drops out of the Trio – why did this happen?

COMMENT: Georgia drops out of the Trio – why did this happen?
Macron wants ‘accelerated co-operation’ for Moldova as details of EU ‘political community’ proposal leak
Georgia to take management control of struggling mineral water company Borjomi