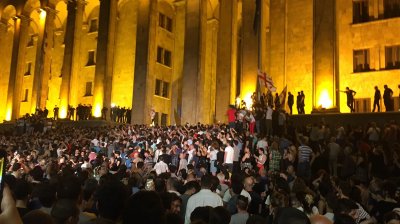 Some estimates put the number of protesters at more than 25,000.
By Iulian Ernst in Bucharest June 21, 2019

Thousands of protesters attempted to storm Georgia’s parliament in Tbilisi on June 20 after angry demonstrations were sparked when word spread that a Russian lawmaker was giving a speech from the speaker’s chair inside the legislature.

By late evening, AFP was quoting an advisor to Prime Minister Mamuka Bakhtadze as saying 39 police officers and 30 protesters had been hospitalised with injuries. Hundreds were arrested.

After hours of growing confrontations in front of the parliament, riot police stopped protesters from entering the building, reportedly using tear gas and rubber bullets.

The Russian MP, Sergei Gavrilov, was attending a meeting of the Interparliamentary Assembly on Orthodoxy (IAO)—an organisation gathering representatives from largely former communist countries, initiated and hosted by Greece. He addressed delegates in Russian.

The government and Georgian President Salome Zurabishvili called the incident that triggered the violence a “protocol blunder”. They accepted no responsibility for it and hinted that the opposition was behind the protest.

“As far as I know, this [invitation to the Russian MP] was a technical mistake,” read a statement from Bidzina Ivanishvili, chairman of the ruling Georgian Dream party.

Zurabishvili, as quoted by Radio Free Europe, called the actions of Gavrilov a “major crime”, but said that it did not justify the demonstration and implied that someone was behind the protests.

“Insult to the country”
A Russian sitting in the speaker’s seat “was an insult to the country and its honour. However, this cannot excuse the artificially instigated wave [of protests] aimed at storming the parliament and causing a coup”, she said.

Zurabishvili, in a Facebook post, also questioned the very rationale of the Orthodox event taking place inside Georgia’s parliament. This, in terms of getting to the details of the “protocol blunder”, might provide deeper insight into the logic behind developments.

“What does it even mean? What type of Orthodox ties can we have with the country that has not only occupied our territories, but also fights against religion and Christian norms,” Zurabishvili stated, claiming that this was Russia’s attempt “to use religion for political reasons”. “And if indeed it is so, why do we join this political game?” she asked in her Facebook post, cited by Civil.ge

Opposition party European Georgia called for the resignations of the parliament’s Speaker Irakli Kobakhidze and Minister of Interior Giorgi Gakaria and demanded elections take place a year early, this autumn.

Kobakhidze expressed his own outrage after Gavrilov took the chair and terminated the parliamentary session immediately. “The actions of the Russian Federation have nothing to do with Christianity or Orthodoxy and this is a fact that we have mentioned and will always mention. I want to repeat that what we saw at the parliament plenary sitting was absolutely inadmissible."

Russia supports the independence of, and intends to integrate, Abhazia and South Ossetia, two separatist regions accounting for some 20% of Georgia’s territory, which declared independence after the five-day Russo-Georgian war that took place in 2008.

Confrontations between groups of protesters and police continued throughout the night on the streets of Tbilisi. Around 06:00 local time on June 21, police entirely dispersed a protest rally on Rustaveli avenue in front of the parliament building and around 07:30 local reports indicated that no more protesters were on the streets.

COLCHIS: Georgia is in crisis, but it’s far from the end of democracy

OPINION: PM's resignation is a make-or-break moment for Georgia

Top ruling party lawmaker assesses West’s reaction to Georgia’s political crisis as “measured and soft”
COLCHIS: Georgia is in crisis, but it’s far from the end of democracy
OPINION: PM's resignation is a make-or-break moment for Georgia