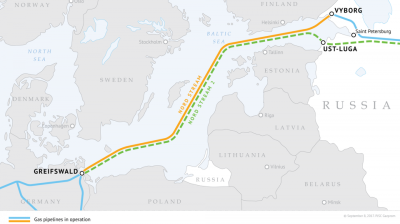 Parallel routes of twin Nord Stream pipelines from Russia to Germany under the Baltic Sea.
By bne IntelliNews January 10, 2021

Germany’s northern state of Mecklenburg-Vorpommern aims to establish a foundation to support the completion of Russia’s Nord Stream 2 gas pipeline, amid the looming threat of further US sanctions against the project.

The state’s parliament gave the green light on January 7 to the initiative, which would set up a foundation that could buy needed materials for pipeline construction, thereby circumventing Washington’s sanctions. Lawmakers approved €200,000 ($245,000) of public money for the fund, while the Gazprom-owned Nord Stream 2 operating company has pledged a further €20mn. The foundation will be headed by ex-state premier Erwin Sellering, former European Parliament member Werner Kuhn and an entrepreneur called Katja Enderlein.

“We believe that it is right to build the pipeline,” State Premier Manuela Schwesig told reporters.

Construction ground to a halt in December 2019 after Swiss contractor Allseas was forced to withdraw when the US slapped sanctions on the project, leaving just 6% of its offshore section left to complete. Work resumed in German waters last month and is due to re-commence in Danish waters on January 15, with Russia using its own pipelaying vessels.

Washington’s current sanctions only target those companies providing pipelaying vessels for Nord Stream 2. But a proposed second round will extend penalties to those providing technical certification and insurance for the work, as well as additional pipelaying activities such as surveying, trenching and rock placement.

The legislation was part of a broader defence bill that cleared US Congress but was vetoed by US President Donald Trump. The House of Representatives then voted to override that veto and the Senate followed suit on January 1, meaning the sanctions could come into law in the next few weeks.

The US maintains that Nord Stream 2 will give Russia too much leverage over Europe, and has promoted US LNG as a better alternative. But the pipeline enjoys strong support from the current German government, led by German Chancellor Angela Merkel’s conservative Christian Democratic Union (CDU). And that support has only solidified because of US actions. Yet the pipeline is still divisive in Germany, with opposition politicians warning it will lock the country into fossil fuel dependence for longer.

Creating a state-backed foundation will make it harder for the US to thwart Nord Stream 2 by taking steps such as freezing funds, as the foundation will have no commercial activities beyond the pipeline.

For its part, Russia says it is confident that additional US sanctions will be too little too late. Russian Deputy Prime Minister Alexander Novak told state Russian television in late December that the pipeline would be finished because it is in Europe’s commercial interests. “It’s a commercial project, which is, in the first place, in the interests of our foreign partners,” he said.