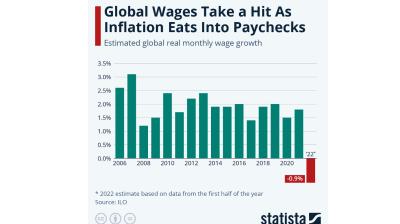 Wage growth has failed to keep up with inflation for the first time in 20 years. Real incomes were down by 1.4% this year if China is excluded. / bne IntelliNews
By Statista December 6, 2022

The global inflation crisis paired with lacklustre economic growth and an outlook clouded by uncertainties have led to a decline in real wages around the world, a new report published by the International Labour Organisation (ILO) has found. According to the 2022-23 Global Wage Report, global real monthly wages slid by 0.9% this year on average, marking the first decline in real earnings at a global scale in the 21st century, Statista reports.

Exclude China from the calculation and real wages have fallen further, by 1.4%, the ILO said.

The multiple global crises we are facing have led to a decline in real wages. It has placed tens of millions of workers in a dire situation as they face increasing uncertainties,” ILO Director-General Gilbert F. Houngbo said in a statement, adding that “income inequality and poverty will rise if the purchasing power of the lowest paid is not maintained.”

Inflation rose faster in high-income countries, leading to above-average real wage declines in North America (minus 3.2%) and the European Union (minus 2.4%).

The biggest fall in income has been in Eastern Europe (3.3%), where Ukraine made the largest contribution to the reduction of the indicator and could lose some 15% of its jobs, according to the ILO.

By contrast, the biggest gains were recorded in the countries of Central Asia (up 2.5%) and the Asia-Pacific region (1.3%). In the first half of this year Central Asia became the world’s leader in wage growth, according to the ILO. According to its Global Wage Survey, average earnings in the region rose by 2.5% in six months, showing the most positive dynamics. For comparison, in 2021 it was 12.4%.

The ILO finds that low-income earners are disproportionately affected by rising inflation. As lower-wage earners spend a larger share of their disposable income on essential goods and services, which generally see greater price increases than non-essential items, those who can least afford it suffer the biggest cost-of-living impact of rising prices.

“We must place particular attention to workers at the middle and lower end of the pay scale,” Rosalia Vazquez-Alvarez, one of the report’s authors said. “Fighting against the deterioration of real wages can help maintain economic growth, which in turn can help to recover the employment levels observed before the pandemic. This can be an effective way to lessen the probability or depth of recessions in all countries and regions,” she said. 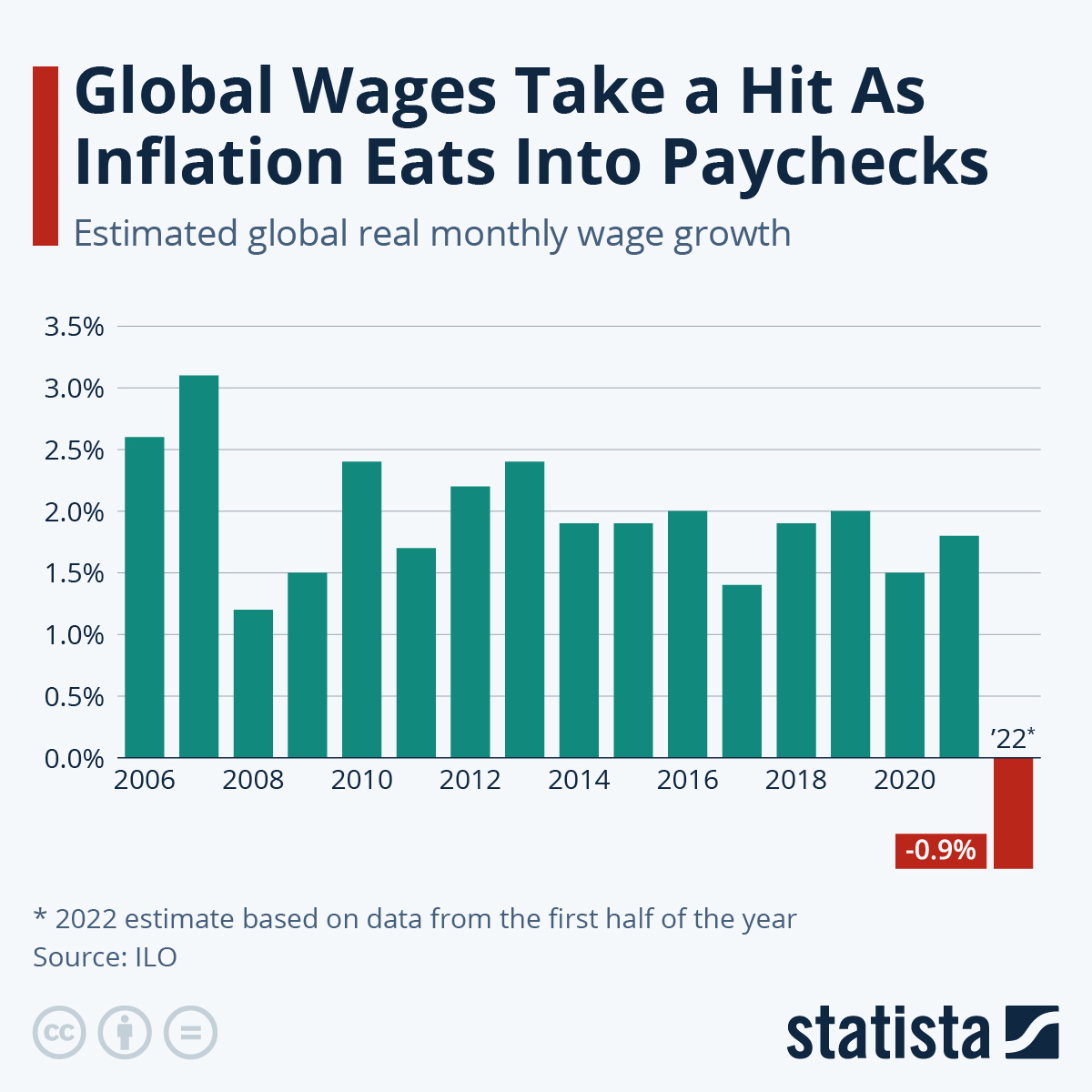 You will find more infographics at Statista

Downturn mood eases in Polish manufacturing as PMI grows to 47.5 points in January
bneGREEN: Most growth in power generation by 2050 will be solar and wind – BP
Russian gas pipe flow dips to record low in January