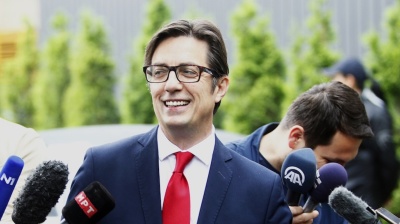 By Valentina Dimitrievska in Skopje May 6, 2019

The candidate of North Macedonia’s governing coalition Stevo Pendarovski won the presidential election runoff on May 5, leading his rival from the main opposition party by nearly seven percentage points.

The outcome of the second round was uncertain as the two candidates had been neck and neck in the first, and there were also fears that the threshold of 40% might not be reached. After the first round of the presidential election was marked with a low turnout of around 41%, people were more eager to vote in the runoff, which ended with a turnout of 46.7%, making the vote successful and averting a possible political crisis.

The victory for Pendarovski, 56, is a validation of the ruling coalition’s pro-western approach of which the priorities are Nato and EU integration.

Pendarovski won 51.66% of the votes while his rival Gordana Siljanovska-Davkova, a 64 year-old law professor and the candidate of the main opposition VMRO-DPMNE party, won 44.73% after all votes were counted, the state election commission’s data showed.

In the first round held on April 21, Pendarovski was less than one percentage point ahead of Siljanovska-Davkova, while the third candidate ethnic Albanian Blerim Reka won 10.6% of the votes.

The president of the election commission Oliver Derkoski said that the election were fair and democratic without major incidents.

About 1.8mn citizens were eligible to vote. More than 3,000 local and international observers monitored the elections.

“The outcome of the election means that the path for moving forward toward EU membership is guaranteed,” Pendarovski said at the news conference following the vote. Pendarovski was supported by 30 smaller political parties.

"I'll serve all citizens, I will unite people not divide," Pendarovski said.

Following the slim lead of Pendarovski in the first round, which was seen as a signal that voters were not satisfied with the government's performance, Prime Minister Zoran Zaev reiterated that major changes will be made in the ruling party, the government and public institutions in order to eliminate weaknesses.

While the presidency is a mainly ceremonial post, the election was seen as the first major test for Zaev’s Social Democrats following the Prespa name agreement with Greece.

Under the deal the country changed its name to North Macedonia, which was not accepted by the opposition VMRO-DPMNE. However, the deal opened the way for the country to become part of Nato and the EU, as Greece lifted its objections after the decades long dispute was resolved.

The name question was at the heart of the election campaigns of the two opponents.

Instead of congratulating Pendarovski on his election victory, Siljanovska-Davkova said she does not feel that she has been defeated.

After she won in most of the municipalities with a majority Macedonian population, Siljanovska-Davkova stressed that the outcome of the second round shows that it is time for an early general election.

Overall, the turnout of the ethnic Albanians was very low but their votes seem to have been decisive for the outcome of the runoff.

This was the sixth presidential vote in the country and the first since the changing of the country’s name to North Macedonia.

EU Enlargement Commissioner Johannes Hahn congratulated Pendarovski on his election as a president.

“I look forward to the continued cooperation on the EU reform agenda in view of last year’s Council conclusions setting the path towards opening the accession negotiations in June 2019,” Hahn said in a tweet.

Pendarovski was the country’s coordinator for Nato accession. He is a professor of political science and a long-term politician seen as having strong integrity.

This is his second run at the presidency. In the previous election in April 2014, Pendarovski, the SDSM candidate, was defeated by the incumbent head of the state Ivanov, who was supported by now opposition VMRO-DPMNE, which at that time was a strong ruling party.

BALKAN BLOG: Why is it so difficult to set an election date in North Macedonia?

BALKAN BLOG: Why is it so difficult to set an election date in North Macedonia?
Movie night at the airport
North Macedonia extends state of emergency for two weeks