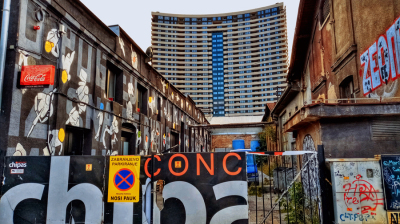 Bosnia & Herzegovina, Croatia, Montenegro and Serbia all have substantial grey economies, estimated at 27.1% of GDP in Croatia and approximately 30% in the other three countries, well above the EU average of 17.9%.

This is stated in an extensive study "Illuminating the Shadow Economy: Exploring the Informal Economy in the Four Countries of Southeast Europe", conducted by the Center for Policy and Governance from Sarajevo.

The research was conducted in the four countries by surveying 4,064 adult respondents, and is based on the analysis of perceptions and attitudes towards the quality of institutions, the level of taxation, detection and punishment of illegal activities, as well as tax morality, ie justification in the grey economy.

The most interesting data and conclusions, which give a clear picture of the grey economy of the region, are in the segments of undeclared work and shopping without obtaining an invoice, and justifying and punishing actions in the grey economy.

The research findings indicate that there is undeclared work in all four countries as well as partially undeclared work, ie 25.8% of Serbian citizens know at least one person who works in this way, while in the other three countries this percentage varies from 16.3% in Croatia to 18.7% in Montenegro. 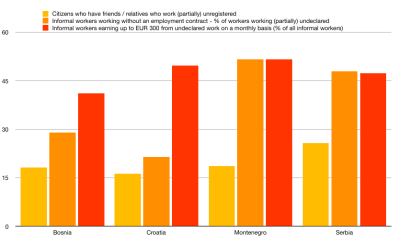 This is a sensitive topic, which would mean that the actual rates are probably higher. Research also indicates that 41.3% of Serbian citizens represent a potential undeclared workforce, while the percentages in the other three countries vary from 29.2% in Bosnia to 35.5% in Montenegro, the study states.

The results of the research also indicate a high frequency of informal purchases of goods and services. 32.3% of Montenegrin citizens procure goods and services without receiving an invoice, and in the other three countries this percentage varies from 20.5% in Bosnia to 28.8% in Serbia. About 25% of the region's population justifies undeclared work and shopping without receiving a bill.

The grey economy has a negative impact on the collection of public revenues and thus on the quality and availability of public services, ie there is a reduction in budget funds for education, health, social benefits, culture, and all other services provided by the state and financed from taxes, said the Center for Policies and Management.

Igor Gavran, an economic analyst, told Nezavisne novine that the only surprise for him in the research results is that the difference between Croatia and other observed countries is not greater.

Belarus' gold and foreign currency reserves rose 4.9% to $7.3bn as of May 1
1 hour ago
Ukraine's international reserves increased to $28bn as of the start of May
2 hours ago
Ukraine’s consumer price inflation slowed to 8.4% in April
2 hours ago
Romania’s retail sales up 4.1% y/y in Q1
3 days ago
ING: Inflation pressure continues to build in Poland
3 days ago