Growth already past its peak after Western Balkans’ brief blossoming 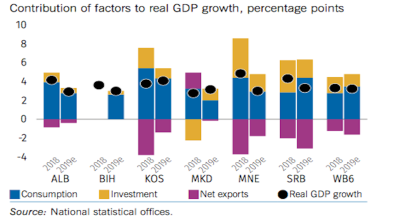 Across the six EU-aspiring countries, the development bank forecasts growth will slow from a high of 3.9% in 2018 to 3.2% in 2019. With the exceptions of Kosovo and North Macedonia, growth will slow down in countries across the region, with the slowest growth — 2.9% — forecast for Albania.

The report, titled “Rising Uncertainties”, questions whether the consumption driven growth in the region is sustainable, noting that other drivers — namely investment and exports — are starting to tail off. In the report, the World Bank downgraded its 2019 forecasts for Albania, Bosnia & Heregovina, Kosovo and Serbia.

“Net exports continue to subtract from growth, as the region’s trailing competitiveness weighs on opportunities for its small open economies to access larger markets. Instead, consumption continues to be the main driver of economic activity in Western Balkan countries,” says the report.

“Consumption growth has been fuelled by higher public spending and near double-digit growth in household lending, raising questions on the sustainability of the consumption-driven growth in the region.”

At the same time, internal and external imbalances are rising, the World Bank warns. It points out that rising budget revenues have not been enough to cover the surge in spending, in particular on electorally popular raises in public sector wages and social spending.

“As a result, fiscal deficits are projected to go up in 2019 in all countries in the Western Balkans except Kosovo and Montenegro. External imbalances also started to rise as exports slow because of falling demand from EU trading partners amid rising trade tensions,” it says.

Growth is projected to pick up again after this year and across the region it will be close to the 2018 level by 2021, says the World Bank, pointing to country-specific factors such as the expected rebound in hydropower-dependent Albania from the dip in generation cause by low rainfall this year, increased public sector investment in Bosnia & Herzegovina and Kosovo, and a projected increase in consumption in Serbia as public sector wages and pensions are raised. And through to the end of the forecast period in 2021, GDP growth will be substantially faster than in the EU28 countries.

However, the report identifies numerous downside risks to the outlook for the next couple of years: “The region faces rising uncertainty as economic growth slows globally, including in the EU— the Western Balkans’ major trading partner and source of financial flows. Rising trade tensions and oil price volatility further raise the external risks. At the same time, elevated political polarisation in several countries in the region, as well as weather-related shocks affecting agricultural and energy production, add to domestic uncertainties.”

Russia's services PMI falls for second month due to impact of coronavirus
10 minutes ago
Romania’s industrial prices surge by 26.8% y/y in October
1 hour ago
Service sector and public spending save Hungary’s Q3 GDP
1 day ago
Kazakh manufacturing PMI shows return to contraction in November
1 day ago
Poland’s PMI climbs to highest point since August
1 day ago