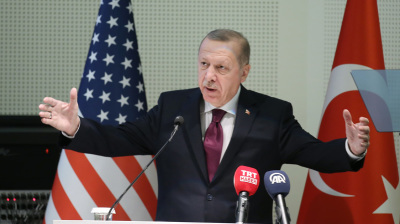 During his trip to the US, Erdogan gave a speech to members of the Turkish-American community at the Diyanet Center of America in Washington, D.C.
By bne IntelliNews November 14, 2019

The share price of Turkish state lender Halkbank fell 4.21% on November 14 after the previous day’s White House meeting between Turkey’s President Recep Tayyip Erdogan and US counterpart Donald Trump failed to produce public standpoints addressing the indictment filed in Manhattan against the bank for allegedly taking part in a huge scheme to evade sanctions on Iran.

The stock sank despite a ban on short selling that Turkish authorities applied on October 16 after Southern District of New York (SDNY) prosecutors announced they had pressed charges.

The meeting between Trump and Erdogan "fell short to provide any material development about the critical issues such as... [the] Halkbank case for the time being," Turkey’s Oyak Securities said in a note.

It is unclear whether Trump had advance notice that SDNY would file the indictment. Erdogan, claiming the case is the result of a conspiratorial plot pursued by his Gulenist enemies, has previously addressed Trump and his predecessor Barack Obama with bids to have it closed.

Three and a half years ago, Turkish-Iranian gold trader Reza Zarrab was arrested in Miami where he said he had arrived for a holiday. Eventually, he turned state’s evidence and after pleading guilty to conspiring to skirt sanctions, he testified during the 2017 trial of then Halkbank executive Mehmet Hakan Atilla that Erdogan had personally approved the bank's participation in the sanctions-busting scheme. Erdogan has always strenuously denied the allegation. Atilla was convicted and served a prison sentence in the US, but he returned to Turkey in July and not long after the indictment was filed against Halkbank he was made head of the Istanbul stock exchange, presumably in a show of defiance to US officials.

Observers are puzzled as to why Trump appears to be reluctant to approve action against Turkey over Halkbank and other issues. "The president is pursuing maximum pressure on Iran, yet he is easing up on the bank responsible for the largest sanctions evasion scheme in modern history," Jonathan Schanzer, a former terrorism finance analyst at the US Treasury Department, was quoted as saying by NBC News on November 13.

The media outlet also reported that a spokesperson for the US Attorney's Office in Manhattan, which is behind the indictment, declined to comment on Zarrab's continuing cooperation with prosecutors, whether it might be seeking arrests of those involved in the scheme or the timing of the indictment that came shortly after Turkey invaded northeastern Syria.

On November 12, NBC reported  that John Bolton, former national security advisor to Trump, had suggested that the US president’s approach to policy on Turkey is motivated by personal or financial interests. Several people who were present at a Morgan Stanley global investment private dinner in Miami were cited by the broadcaster as saying Bolton told hedge fund executives who were guests at the event that he believed there was a personal or business relationship dictating Trump’s position on Turkey because none of his advisers were aligned with him on the issue.

The Trump Organization has a high-rise property in Istanbul. The president's daughter Ivanka Trump attended the opening with Erdogan in 2012. Named Trump Tower Istanbul, it is the group’s first and only office and residential tower in Europe and Zarrab had an office there. Trump’s personal lawyer, Rudy Giuliani, has acted as an unregistered lobbyist for Zarrab.

On November 13, Courthouse News reporter Adam Klasfeld wrote on Twitter: “Some weeks ago, I asked [Democrat] Senator [Tammy] Duckworth about her inquiry into Trump’s profits on Trump Tower Istanbul. The deadline was yesterday, and Duckworth said today that the Trump Organization did not supply the requested information.”

After their White House meeting, Trump and Erdogan gave a joint press conference but did not provide any specifics on how they would address the Halkbank matter nor issues such as the Syria incursion by Turkey—commenced in early October after Trump told Erdogan he would ensure US troops would not get in the way to defend the Turkish armed forces’ target, namely Kurdish fighters who were a loyal ally to the Americans in their battle to crush Islamic State in Syria but who are regarded by Ankara as a “terrorist” and insurgent threat—which has upset Congress and Turkey’s acquisition of Russian S-400 missile defence systems, another move which has members of the House of Representatives and Senate up in arms.

Trump said at the press briefing that he is a “big fan” of strongman Erdogan.

In a boost for Erdogan while he was in the US, Republican Senator Lindsey Graham on November 13 blocked a congressional resolution that would have recognised the killing of Armenians by Ottoman Turks during and after WWI as a genocide. In a blow, Republican senators told US press that they had reiterated to Erdogan that as long as Turkey maintained ownership of S-400s, it would not be receiving the F-35 fighter jets that it has ordered, nor, despite Ankara’s Nato membership, would it be invited back into the manufacturing and development programme for the aircraft.

Pulled out his iPad

With little else of substance to report on after the Erdogan-Trump press conference, much of the US media ran extensive stories on how Erdogan reportedly pulled out his iPad while in the Oval Office meeting Trump and a group of five Republican senators, including Graham, and made those present watch a clunky propaganda video that depicted the leader of the primarily Kurdish Syrian Democratic Forces (SDF), who fought alongside US forces in the battle against Islamic State, as a terrorist.

Axios reported a source as saying that after the film concluded, Graham asked Erdogan: "Well, do you want me to go get the Kurds to make one about what you've done?"