HEATMAPS: Inflation is defeated but the "Never Never index" still too high 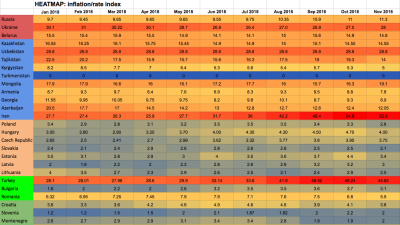 Inflation is low in all the countries of New Europe, but add in central bank rates and it's clear many countries are still fighting to control price rises.
By Ben Aris in Berlin January 7, 2019

This is the first in a series of articles featuring heatmaps of the main macroeconomic indicators that allow direct comparisons between the countries of New Europe. They are part of a package that includes bne IntelliNews’ OUTLOOK 2019, detailed country reports looking at the prospects for 2019 in each of the countries we cover. See a complete list of the OUTLOOK reports here. In addition, bne IntelliNews publishes detailed monthly country reports on a selection of the most important countries in our patch. See the OUTLOOK country list page for more information.

Sky high inflation has been the bane of emerging Europe for most of the last two and half decades. The beast has been slain in almost all of the countries of the region, but if you combine this result with the level of central bank policy rates then it is clear some countries are still in the battle to contain price rises.

The first in a series of heatmaps from bne IntelliNews, the consumer price inflation (CPI) heatmap shows that inflation is in single figures for almost all the countries in the region.

The problem children in the region that are still battling high inflation are Turkey and Iran, which are both in the midst of economic crises – the former self inflicted and the latter due to new US sanctions.

The real success story has been Ukraine, which is recovering from an almost total collapse of its economy in 2015. Encouragingly the heatmap shows that inflation fell to 10% as 2018 came to an end from over 60% in April 2015. The National Bank of Ukraine (NBU) has shown real backbone and made growth-killing rate hikes three times in 2018, putting controlling inflation above stimulating spluttering growth. As a result it has delivered stability and burnished its reputation for independence in the process that will pay off soon when the country goes back to the bond markets in 2019.

With a few exceptions, almost all of the other countries in the region have inflation at 3% or lower. 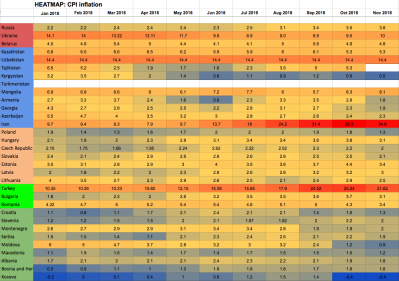 However, this low inflation has come at the price of keeping interest rates high in many countries, which is clear from the second heatmap and shows the region is still a two track tale.

In general the economies of Central and Southeast Europe have also managed to keep central bank monetary policy rates low, whereas in Eastern Europe and Central Asia the fight against inflation is clearly still in full swing as central banks in those regions have been keeping the cost of borrowing high.

Again Turkey and Iran stand out in the heatmap as having very high rates as they deal with the aftershocks from their crises, but Ukraine is also in the red and rates rose somewhat from 16% to 18% over 2018 as the NBU struggled to control strong inflationary pressures.

In almost all of the other countries the trend was of falling rates, or in a few cases the upward adjustments were minor, except Russia, which started 2018 with another rate cut in a series of constant cuts over the last four years. However, the easing cycle in Russia came to an end in September when the Central Bank of Russia (CBR) unexpectedly hiked rates in a preemptive move that anticipated new “crushing” sanctions from the US in 2019. That will hurt Russia’s growth story, but the state is more concerned with defending itself from external shocks at the moment than it is with leveraging its otherwise strong macro position to boost growth. 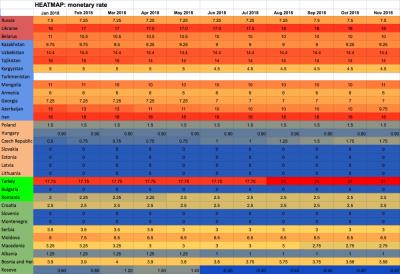 Buying on the Never Never

So digging a little deeper the picture is more nuanced than a cursory glance at the CPI numbers might suggest. bne IntelliNews made a simple “Never Never” index that combines the changing cost of buying with the changing cost of borrowing by adding the CPI rates to the key policy interest rates to highlight the differences.

In an ideal world the Never Never index should be around 4% (CPI of 2% plus overnight rates of 2%) and the progress most of Central Europe has made since it joined the EU is immediately apparent as nearly all the countries in that region have a Never Never index of 4% or less.

Again Turkey and Iran stand out, but the picture in Southeast Europe is far more mixed; almost none of the countries of the Balkans have excessively high Never Never index numbers, but Romania and Moldova are the two exceptions.

All the countries of Eastern Europe and Central Asia clearly have a lot more work to do to bring their Never Never index numbers down by at least half in most cases, or even more. 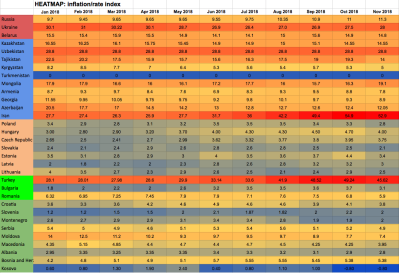 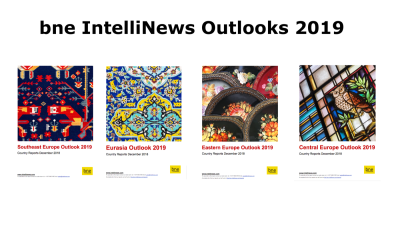 After a turbulent four years, Romania’s December 6 general election looks set to install a government led by the centre-right PNL and backed by a stable majority in parliament.

Ukraine’s banking sector continues to make good progress in recovering from the hits it has taken this year from external shocks and fundamentally remains healthy, even if growth remains anaemic.

News that Jozsef Szajer, the author of Hungary's new Christian-conservative constitution, was busted by police at a lockdown sex party dismayed voters of Hungary's ruling Fidesz.

Following the phenomenal success of “The Queen’s Gambit,” Netflix’s fictional drama about a female chess prodigy, Russia has released its own version of the genre – except “On the edge” is about female fencing stars

2020 has been one of the worst years in living memory. Worse than 2008. But the global economy should bounce back in 2021 as the pandemic fades thanks to the new vaccines