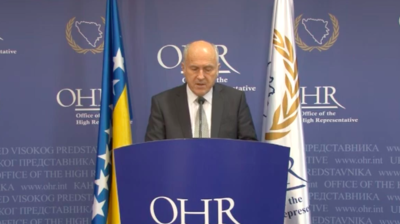 High representative Valentin Inzko introduced amendments to Bosnia’s Criminal Code on July 23, sanctioning the glorification of war criminals convicted by final and binding judgments and the denial of genocide, crimes against humanity and war crimes, the Office of the High Representative (OHR) said in a press release.

The amendments to the Bosnian Criminal Code aim to address the current legal framework of Bosnia & Herzegovina, which does not offer an adequate response to the issue of hate speech manifested through the denial of the crimes of genocide, crimes against humanity and war crimes, even when those crimes have already been adjudicated with final and binding judgments reached by a number of domestic and international courts, the OHR said in the statement.

This decision of the high representative was welcomed in most of Bosnia and the region, but also met with opposition from political representatives from Republika Srpska, the smaller of Bosnia’s two entities. Milorad Dodik, the Serb member of the Bosnian presidency, initiated the signing of a petition to repeal "Inzko's law", even threatening the secession of Repubika Srpska from Bosnia.

The US embassy and Nato responded immediately to the threats, saying actions or threats related to the breakup of Bosnia & Herzegovina are unacceptable and contrary to the Dayton Peace Agreement and the Bosnian constitution, which do not give the entities the right to secede. In response to Dodik's petition, in the Bosnian Federation, the signing of a petition to arrest Dodik was immediately initiated, Oslobodjenje reported.

Srdjan Puhalo, a political analyst from Banja Luka, pointed out that there are provisions in the Serbian Criminal Code also that prohibit the denial of genocide, crimes against humanity and war crimes. Puhalo therefore sarcastically called on Serbs to sign a petition and overthrow this unjust law — not only in Bosnia then in Serbia as well — and asked “if a million Germans sign a petition that the Holocaust did not happen, does that mean that the Holocaust did not happen?”

Dodik himself claimed in 2007 that genocide had been committed in Srebrenica. "Genocide took place in Srebrenica! It was ruled by the court in The Hague and it is an indisputable legal fact," said Dodik in a statement that can be seen and heard in the video clip.

The International Criminal Tribunal for the former Yugoslavia (ICTY) in The Hague ruled that the massacre of the Srebrenica enclave's male inhabitants constituted genocide, a crime under international law. The ruling was also upheld by the International Court of Justice (ICJ) in 2007.

Numerous members of the Republika Srpska political and military establishment have been found guilty of war crimes and crimes against humanity in previous years. Former Bosnian Serb leader Radovan Karadzic, for example, was sentenced to life imprisonment, as were wartime Bosnian Serb military commander Ratko Mladic, dubbed the Butcher of Bosnia, and several others.

Janusz Bugajski, an American analyst and senior associate at the Center for European Policy Analysis, told TV Hayat that "denial of proven war crimes and denial of an international legal verdict for genocide are harmful forms of misinformation that incite interethnic conflicts. This is especially emphasised for Bosnia & Herzegovina, where pain and grief over crimes committed against innocent and unarmed civilians are still present."

However, Russia criticised Inzko’s actions. "We profoundly resent the flagrant and absolutely unacceptable interference of outgoing high representative for Bosnia & Herzegovina Valentin Inzko into the domestic affairs of this sovereign and independent European state," a Russian foreign ministry spokeswoman said.

"His actions are nothing but a blatant stretch of authority under the General Framework (Dayton) Agreement for Peace in Bosnia & Herzegovina of 1995 and a direct violation of the course towards delegating all responsibilities to the Bosnian side that was endorsed by the Peace Implementation Council’s Steering Board. Valentin Inzko’s illegal actions run counter to his Dayton mandate of an unbiased and objective mediator."

According to the provisions of the Dayton Agreement, high representatives of the international community have the possibility to impose certain measures. All previous high representatives have used these measures hundreds of times so far, from the imposition of laws to the removal of various politicians. That why Puhalo has now reminded Dodik that he and his SNSD party applauded when high representative Carlos Westendorp on March 5, 1999 replaced Nikola Poplasen, a former Bosnian Serb politician and the president of Republika Srpska from 1998 to 1999.

As many have pointed out, Inzko's amendments to the Criminal Code only prohibit the glorification of crimes for which international courts have already issued final verdicts.

In a related development, Russia and China failed on July 22 in a bid to get the UN Security Council to strip some powers from the high representative. The resolution put forward by Russia and China required 9 out of 13 votes, and the resolution received only two votes, from the two countries, reported Reuters.

Former German minister Christian Schmidt is due to take over from Inzko on August 1.

Ukraine will receive $5.5bn in support from the US later this month
14 hours ago
John Malkovich to turn Skopje into Hollywood of the Balkans
14 hours ago
Envoy says start made on construction of Turkish attack drone factory in Ukraine
1 day ago
Huge explosion rocks Russian airbase on the Crimean peninsula
1 day ago
Russia cuts oil flow via Ukraine's Druzhba pipeline, blaming sanctions for blocking transit payments
1 day ago