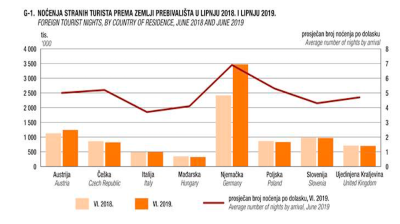 Croatia saw an 11.2% increase in tourist arrivals in June compared to the same month of last year, while tourist overnights were up by 9.8% y/y, the latest data from the Croatian Bureau of Statistics (DZS) showed on August 9.

The figures — an increase in tourist arrivals to 2.9mn and 13mn tourist overnights during the month — go some way towards allaying fears that Croatia could be heading for another poor year in the tourist sector, which accounts for a substantial share of GDP.

In June, German accounted for the latest share of foreign tourist overnights, 28.4% or 3.5mn, which was an increase of 43.7%, while the number of tourist arrivals from Germany were up by 42.5%.

This is good news for Croatia after the numbers for May were extremely poor due to the unseasonably wet weather, although Tourism Minister Gari Cappelli said in mid-July that figures for the year to date were up compared to 2018.

This was borne out by the June data from the DSZ, which showed that in the first six months of 2019, there were 6.5mn tourist arrivals and 22.9mn nights spent in commercial accommodation — increases of 7.0% y/y and 3.4% y/y respectively.

However, according to the Croatian National Tourist Board (HTZ) only 4.6mn tourist arrivals were registered in Croatia in the peak summer month July, 0.7% down compared to the same month last year. It noted that large numbers of tourists from Italy — one of the main markets for Croatia — were visited Slovenia this year.