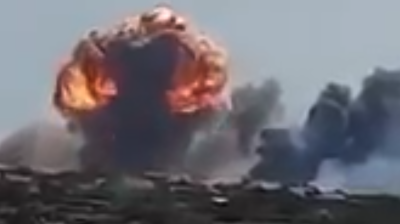 A huge explosion rocked a Russian airbase in the Crimean in what may have been the first Ukrainian missile strike deep in the occupied peninsula on August 9. / bne IntelliNews
By bne IntelliNews August 9, 2022

Five people were reported injured in what Moscow claimed was an accidental explosion of an ammunitions dump at the Saky air force base that provides air support for Russia’s Black Sea Fleet.

Observers speculated that the explosion was caused by a Ukrainian missile strike. Local witnesses told Reuters they heard at least 12 explosions around 3:20 p.m. local time from the Saky air base near Novofedorivka on Crimea's western coast. They described a final blast around 30 minutes later as the loudest, which was captured on video and shared on social media.

Novofedorivka and Saky are around 50 km (30 miles) north of the port of Sevastopol, home of Russia's Black Sea Fleet. The Saki base has been  used by Russian warplanes to strike areas in Ukraine’s south.

Russia's defence ministry said the "detonation of several aviation ammunition stores" had caused an explosion, Russian news agencies reported, but that there had been no injuries. However, the head of Crimea's health department told Russian newswire Tass that five people had been injured, including one child.

Russia’s defence ministry denied that the explosions were caused by a Ukrainian missile strike and that none of the planes on the base had been damaged. Moscow said tha tan investigation into the cause of the explosions was under way.

If confirmed the attack was a Ukrainian missile strike it will be the first time that targets on the peninsula have been hit. The attack would show Ukraine’s offensive capabilities have increased as the base is over 120km behind the front line, and Crimea has been regarded by Moscow as largely safe from attack.

The headquarters of Russia’s Black Sea Fleet in the Crimean port of Sevastopol was hit by a small-scale explosion delivered by a makeshift drone last month in an attack blamed on Ukrainian saboteurs, the Wall Street Journal reported.

Moscow has previously said that any attack on Crimea, considered by Russia as its sovereign territory, would trigger massive retaliation, including strikes on “decision-making centres” in Kyiv. Until now Russia has largely targeted residential areas in Kyiv, which has remains relative unscathed when compared to the majors cities in the south of the country.

Russia's defence ministry said the "detonation of several aviation ammunition stores" had caused an explosion, Russian news agencies reported, but that there had been no injuries.

The US has been supplying Ukraine with increasingly powerful and long-distance missiles. The US M142 High Mobility Artillery Rocket Systems (HIMARS) provided by the US have a range of 80km, almost twice as far as most of Russia’s artillery, and are highly accurate, giving the Ukrainian army the ability to  strike well behind the front line.

Russia has not bothered to spread out its ammunition dumps into smaller units nor camouflaged them, leaving them vulnerable to the HIMARS. Infrared imagery shows that since the HIMARS were deployed the rate of fire of Russia’s artillery has fallen off to next to nothing as Russia struggles to resupply its guns with ammunition.

Ammunition dumps were typically kept only 30km behind the lines with large amounts of ammunition concentrated in a few dumps near the railhead bringing supplies from Russia. Since the HIMARS were deployed, Russia will have to move its dumps back to at least 100km behind the lines, thus increasing the pressure on its truck fleet to resupply the guns and experts estimate the rate of fire of the artillery, Russia’s main tactical advantage over Ukraine, could fall to 30% as a result.

The explosions at the Saki base comes a day after the US promised to supply Ukraine with $1bn worth of weapons, including more missiles for the HIMARS system and new even more powerful and longer-range mobile missile systems. Previously the US President Joe Biden assigned a $40bn weapons package to Ukraine and the US has spent over $7.8bn on military aid to Ukraine before the new package was announced.

So far the US has sent 16 HIMARS to Ukraine and on July 1 promised to send two NASAMS, a surface to air antimissile defence system. The US will also send 50 armoured mobile medical units to treat wounded soldiers.