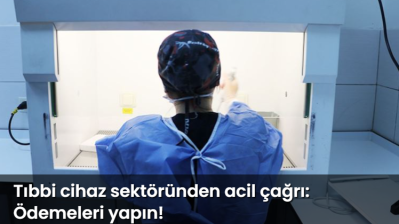 Turkish medical producers on September 15 took to the streets to protest over unpaid bills worth hundreds of millions of dollars for equipment supplied to state and university hospitals.

As bne IntelliNews has reported, the government-controlled hospitals have combined overdue debts of Turkish lira (TRY) 6bn ($711.1mn) owed to local drug and medical equipment supply companies, according to Sekip Avdagic, head of the Istanbul Chamber of Commerce (ITO). Companies have not received payments from public hospitals for 18 months. There are around 14,000 companies in the sector and about half do business with the public sector.

Hundreds of demonstrators threw their office keys to the ground in central Ankara in a symbolic challenge to officials to run the companies themselves without the debt repayment.

Turkish state and university hospitals owe a total of 19bn lira to drugmakers and medical equipment firms according to two major labour and employer associations. They proposed discounted repayment reschedules in 2018 and 2020.

“The sector has been left unpaid and desperate despite having agreed to two discounts in the last three years,” said Metin Demir, head of the Health Industry Employers’ Association of Turkey (SEIS), as quoted by Reuters, adding: “We were forced twice to accept discounts of 27% and 25%, with the promise that all firms agreeing to this would be paid in due course.”

He reportedly cautioned that any delay in supplies caused by the unpaid debts would disrupt health services. “We are asking the health minister to take these keys and run our businesses if he can, under current circumstances,” Demir was also reported as telling the several hundred protesters.

The SEIS says around 250,000 employees are affected by the deadlock over the debts.

Last year, US Ambassador David Satterfield raised the issue. He said that Ankara owed more than $2bn to pharmaceutical companies, including US ones. He warned that the firms would exit Turkey unless they were paid.

Health costs in Turkey have risen sharply since the country’s 2018 currency crisis due to a severe depreciation of the Turkish lira. It has lost more than half of its value against the dollar. Health expenditure difficulties have been made worse by the coronavirus pandemic.

The government has so far proposed discounts for suppliers combined with long payback periods of up to three years.

“We no longer have the power to sustain the supply chain,” Demir was also cited as saying, adding that sacrifices made by the suppliers were pushing the sector to the brink of bankruptcy.

US charges Iran operative with plotting to kill former Trump hawk John Bolton
33 minutes ago
Ukraine will receive $5.5bn in support from the US later this month
15 hours ago
John Malkovich to turn Skopje into Hollywood of the Balkans
15 hours ago
Envoy says start made on construction of Turkish attack drone factory in Ukraine
1 day ago
Huge explosion rocks Russian airbase on the Crimean peninsula
1 day ago