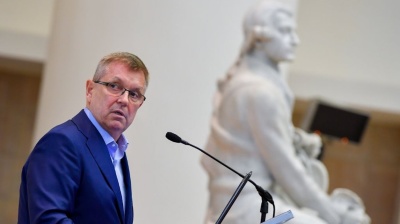 Hungary’s central bank governor Gyorgy Matolcsy called for a comprehensive economic stimulus programme to help the country’s EU convergence in a speech on September 5 at the annual conference of Hungarian economists.

Hungary has moved from one of the most vulnerable countries to the less vulnerable category since 2010 and by 2021, Hungary's net external debt may disappear completely, he said.

In order to continue with catching up to the west, Hungary’s growth needs to outpace the EU average of 2%, he said.

Prime Minister Viktor Orban once referred to Gyorgy Matoclsy as his right-hand man. Known for his visionary and bold projections, Matolcsy has been a key figure in the Fidesz economic team.

He was appointed another six-year mandate at the helm of the Magyar Nemzeti Bank (MNB) this spring although some press reports speculated he longed to join the cabinet by assuming the leadership at the economic ministry, in charge of strategic planning.

He called for the launch of a new economic programme, dubbed the Hungarian model 2.0, which includes a comprehensive stimulus programme, besides the 330 points of a competitiveness turnaround programme proposed by the MNB.

Even though Hungary's economy is growing at one of the fastest rates seen in Europe, economists say the country needs to improve productivity to ensure sustainable long-term growth.

Matolcsy called for the government to reassess the current level of budget reserves. In the 2020 budget ratified in July, there is HUF488bn set aside in reserves, which is more than a two-fold increase from 2019.

Another major task is to strengthen specific industries that could get into trouble and maintain favourable labour market condition with a further increase in real wages and luring back workers from abroad.

There are serious threats to convergence. Among them he named the trade war between the US and China, a hard Brexit, the fragile Italian economy and the downturn in the German economy.

The German automotive industry has been hit by serious failures that could backfire, he said.

It has contributed to Hungarian economic success so far, but the slowdown will spill over to Hungary within six to nine months, he warned.

It is cause for worry that the room of manoeuvre for the European Central Bank has narrowed, he said, stating that today the eurozone could use fiscal and monetary policy tools to an extent less than necessary in a potential crisis situation.