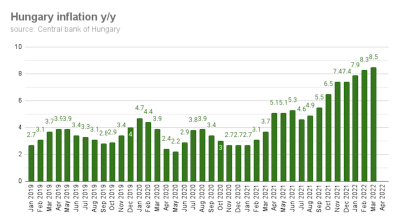 The growth in annual consumer prices accelerated to a 15-year high of 8.5% in March from 8.3% in February despite the price freeze on some basic food samples and fuel, the Central Statistics Office (KSH) said on April 8. The figures were in line with forecasts. Without government intervention, headline inflation would have been 3-4pp higher last month, analysts estimated.

On a monthly basis, prices rose 1%.

In its monthly report, the National Bank (MNB) attributed the rise to a pick-up in prices of all three product groups: processed food, industrial goods and services. Fuel prices contributed 1.2 pp to headline inflation, the analysis shows.

Price changes reached double-digit territory in 40% of the consumer basket. The breakdown of categories in the KSH data shows food prices jumped 13% y/y in March. Poultry and bread prices climbed 21.4% and 27.9% respectively. Consumer durables increased by 9.5% and service prices went up 6%.

The National Bank (MNB) had said in its latest quarterly Inflation Report, released late in March, that CPI was likely to start to fall only in the second half of the year, noting that the short-term path of inflation would depend on "the duration of the war, the extent and persistence of sanctions, as well as governments' responses".

It raised its average annual inflation forecast for 2022 to 7.5-9.8% in the fresh report from 4.7-5.1% in December, citing supply-side effects and price shocks from higher commodity and energy prices.

The dynamic pace of growth of food prices shows that even the price caps on cooking oil, milk and other staples are offset by the price increase of other food products, K&H Bank said.

The inflationary path will depend on how long artificially set prices remain in place. During an international press conference, Prime Minister Viktor Orban noted that the government would seek to extend the mandate of the price caps. The second-round effects of higher commodity and energy prices will keep inflationary pressures high, Takarekbank analyst Gergely Suppan said.

On top of that, there is strong wage pressure as the labour market remains tight, which could trigger further monetary tightening by the MNB. Erste Bank sees the headline inflation rate returning to the central bank’s 4% tolerance band next year and the 3% target to be reached a year later.