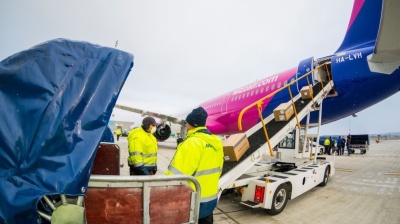 The government picked Wizz Air for the delivery of equipment from China
By Tamas Szilagyi in Budapest July 6, 2020

The government paid Hungarian discount airline Wizz Air some HUF5bn (€14mn) for 65 flights delivering personal protective equipment to the country in the spring as part of the air-bridge between Hungary and China, local media reported on July 4. The actual figure could be much higher as Wizz Air operated more than 100 flights from China bringing masks, ventilators and other protective gear from mid-March.

The government assigned the Hungarian no-frills airline the logistics tasks of establishing the air-bridge between China and Hungary. The Ministry of Foreign Affairs and Trade refused to reply to a query by leftist daily Nepszava as to why Wizz Air was selected instead of specialised cargo companies.

The broadsheet requested public data on April 23 but received a reply more than two months later on July 3. Under the emergency laws granting extraordinary powers to Prime Minister Viktor Orban, the government limited information access by extending the deadline for public institutions to provide requested data from 15 to 45 days.

After pressure to release figures on the procurement of protective equipment, the Ministry of Foreign Affairs and Trade unveiled officials figures on the number of ventilators Hungary acquired during the crisis.

The government procured 10,000 devices, but arrangements were made to order 16,000 to prepare for a worst-case scenario, said state secretary Tamas Menczer. At the height of the crisis, a couple of dozen ventilators were used simultaneously to treat COVID-19 patients in Hungary. The first wave of COVID-19 claimed 589 lives and confirmed cases reached 4,183 as of July 5.

The estimated €14mn-19mn revenue generated by Wizz Air from the air-bridge dwindles in comparison to €3.1bn annual revenue and its revenue lost due to the lockdown.

At the height of the crisis, Wizz Air’s capacities shrank to 3%. The Hungarian airline, however, was amongst the first to restart operation in early May.