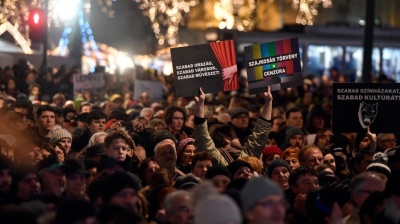 By Tamas Szilagyi in Budapest December 10, 2019

Several thousand people protested in central Budapest on December 9 against a new bill by the right-wing government of Vitor Orban which aims to overhaul funding for cultural institutions and increase state control over theatres. Opposition parties said the bill is an attack on cultural freedom.

The legislation presented in parliament in a fast-track procedure would give state authorities a bigger say in designating directors at municipal theatres that receive central state funding.

The draft bill says that directors of theatres, which are run by the municipal government but supported by government funds, could only be appointed with ministerial approval, and the subsidies of independent theatres will cease.

Under the new legislation, theatres could choose to be financed wholly by the state, by the local government or jointly by the two.

The controversial proposals came after a sexual harassment scandal involving a high-profile director, which rocked one of Budapest's most popular theatres. The University of Theatre and Film Arts on Monday dismissed acclaimed director Peter Gothar and is investigating whether he was involved in similar incidents previously.

While this is not the first harassment case to be unveiled, pro-government media and politicians of the ruling Fidesz party jumped on the issue, which served as a pretext for tightening control over left-leaning cultural institutions.

A senior official in Prime Minister Viktor Orban's ruling Fidesz party later hit out at theatres, saying they demand money from the government while denying officials access to their internal affairs.

The government said the new rules would create transparency and predictability in theatre financing. The National Culture Fund will not be scrapped but renewed and improved, he said.

The bill is an attack on cultural freedom, said the opposition LMP party, which is turning to the general ombudsman with a complaint and hopes that the bill would then be sent to the constitutional court for review.

It sees the planned measures as an attempt to make cultural institutions dependent on local authority funding, among other restrictive measures. The ruling Fidesz has not recovered from its poor showing in the municipal election, so it is submitting a bill that would burden local councils with a knock-on effect on cultural life, opposition MP Antal Csardas claimed.

Usenov claims he died in 2013 and that he is really called Uritsky.

US presidential candidate and former Vice-President Joe Biden released a strong statement condemning the falsification of the Belarusian elections on August 10 and called for an end to the police violence against peaceful protesters.

The Belarus presidential elections were held in an “atmosphere of total falsification, so their results are questionable,” said First Deputy Chairman of the State Duma Committee on CIS Affairs and Relations with Compatriots Konstantin Zatulin.

Seizure requested by prosecutors as part of their investigations related to Moldova's $1bn bank frauds. Victoriabank says shareholders Banca Transilvania and the EBRD will use "all legal means" to protect it.