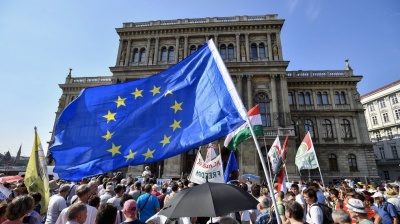 Protests at the HQ of MTA in February
By bne IntelliNews July 3, 2019

Hungarian lawmakers on July 2 approved a controversial bill to take over the research network of the Hungarian Academy of Sciences (MTA) and place it under a government-run body. The decision means yet another blow to academic freedom. The bill was passed with a vote with 131 for, 53 against and three abstentions.

The legislation, which is set to take effect in September, will increase state control over the 200-year institution as the 15 scientific institutes of MTA will be handed over to a newly established state-run Eotvos Lorand Research Network (ELKH). The new state research network will have a new governing board with members appointed by Prime Minister Viktor Orban, and a majority nominated by the government. The board will decide on funding and appoint directors for each research institute.

Additionally, the academy could lose its grant, enshrined in law, to finance its running costs and the state would assume ownership of MTA property.

The planned transformation has triggered several protests since plans were unveiled to centralise research.

Leaders of MTA earlier protested the "forced transformation without any valid reasoning" and complained that the new legal framework offers no guarantees for basic funding.

The academy issued an appeal to lawmakers to weigh its arguments on the matter, aired over months of negotiations with the Innovation and Technology Ministry, and warned that the legislation would "hurt the freedom of scientific research and could result in the loss of values which are fundamental for Hungary". MTA also said earlier that it would initiate an appeal of the legislation with the Constitutional Court, if approved.

The government argues that the MTA’s research network, doing mostly basic research, is not efficient and Hungary's entire R&D should be overhauled. Innovation and Technology Minister Laszlo Palkovics said the legislation paves the way for the modernisation of the system of R+D+I institutions on the basis of international examples, he added.

Palkovics noted that the government has earmarked an additional HUF32bn for research. The new law will also establish a National Science Policy Council, to be headed by Palkovics. This body will advise the government on innovation and research topics.

There is a fear among researchers that they will not be free to choose research topics but may be forced to conduct research in fields the government wants and be expected to provide findings that support their preconceived theses, an MTA researcher told  Human Rights Watch (HRW).

HRW says that past actions the Orban government has taken, such as to ban gender studies at Hungarian universities and force the Central European University out of the country, highlight the government's efforts to silence critical voices, which are part of broader blackslide in the rule of law.

The company has financed its sharp expansion over the last few years by aggressive borrowing. It is now eyeing the mobile telecommunication operations of Deutsche Telekom in Romania.