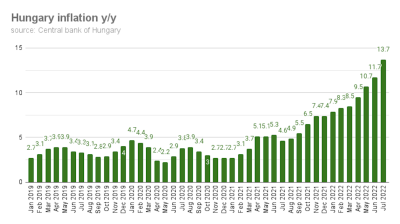 The July reading came in at 0.6pp above market consensus, weakening the Hungarian forint. The HUF was already struggling earlier in the day due to worries about oil supply after Ukraine suspended Russian oil flows to southern Europe because it did not receive transit fees.

The runaway inflation will pile more more pressure on the central bank to keep putting up rates. The Monetary Council of the National Bank of Hungary (MNB) raised its key rate by 100bp to 10.75% on July 26. The base rate is now at its highest level since December 2008. London-based Capital Economics said last month that  rates could rise to 13% by the end of the year.

Analysts said inflation could rise further in the coming months due to repricing and tax hikes, reaching 18% or even more than 20% if energy price controls, introduced in November, were lifted.

The government also rolled back prices for a number of staples, including pork, cooking oil and flour, to mid-October levels from February 1 in an effort to dampen inflation.

Price growth also remained strong in other categories as well, as consumers paid 14% more in y/y terms for consumer durables while service charges were up 6.8% y/y.

“The annual average inflation rate is sure to be above 12% this year and would [only] slowly decline in 2023. Next year’s annual average CPI seems to be also in the double-digit territory and it could only land in [the central bank’s] tolerance band in 2024,” Erste said in a comment.

Russia’s industrial output decline slows to only 0.1% in August
2 days ago
Poll shows Putin's popularity took hit in September but remained as high as 77%
2 days ago
Russia on track to have a record-smashing grain harvest
4 days ago
Bosnia posts annual CPI inflation of 16.8% y/y in August
4 days ago
IMF sees Romania’s economy growing by 4.8% in 2022, analysts are even more bullish
5 days ago