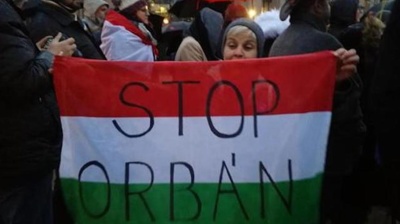 Anti-government demonstrations were held in Brussels
By bne IntelliNews January 9, 2019

Hungarian opposition MEPs organised an anti-government demonstration in Brussels on January 8, attended by Dutch Green MEP Judith Sargentini, the author of a report critical of the state of the rule of law in Hungary approved by the European Parliament (EP) last year.

The EP approved the report filed by Sargentini and launched the Article 7 procedure against Hungary in September, citing the existence of a clear risk of a serious breach of the EU values.

The report notes concerns related to the functioning of the constitutional and electoral system, the independence of the judiciary and of other institutions and the rights of judges, the freedom of expression amongst others.

The government challenged the European Parliament's vote in the Court of Justice of the European Union (CJEU) because abstentions were not counted.

In her speech at the protest organised by the Radical European Democrats (RED) movement, Sargentini stressed the importance of free media and being critical of governments in a democracy.

She said it was dangerous to conflate a government or a political party with the state or its citizens, adding that this is what was happening in the case of debates on the situation in Hungary.

The Dutch MEP said she was expressing solidarity with Hungarians because they are "first-class European citizens", adding that the time for "quiet diplomacy" was over and it was time to act, lest the situation worsens.

As regards her report, she said it focused on a number of key topics about civil rights in Hungary and how the Orban government was undermining those rights.

Hungarian MEPs said Hungary was "revolting" because Prime Minister Viktor Orban had "ruined" the shared European ideal in the EU over the past few years. They criticised the European People's Party group leader Manfred Weber for "protecting a deceitful, corrupt regime that is rotten to the core".

The demonstration is part of US billionaire George Soros's campaign for the upcoming European parliamentary elections, the communications director of the ruling Fidesz party said on Tuesday.

Balazs Hidveghi repeated the government's allegations that the Hungarian-born billionaire is attacking Hungary though liberal MEPs such as Sargentini because the government rejects immigrants and "stands in the way" of the implementation of Soros's pro-migration plan.

Swiss solar panel maker Flisom will build a HUF12.5bn (€35mn) plant in Kecskemet, it was announced on April 28. The company is going to establish its first high-capacity production unit outside of ... more

Hungary expects the peak of the coronavirus (COVID-19) epidemic in early May and the government has launched a controversial programme to empty tens of thousands of hospital beds to make room for new ... more

Hungary's seasonally-adjusted Purchasing Managers Index (PMI) plummeted to 29.1 points in March from 50.3 in February, showing the impact of the coronavirus pandemic, the Hungarian Association of ... more