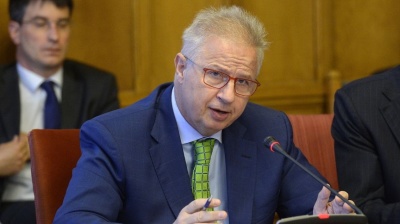 Hungary’s candidate in the new European Commission Laszlo Trocsanyi could become commissioner either for humanitarian aid and crisis management, or international cooperation and development, local media reported on September 4.

The two positions offered by European Commission President-elect Ursula von der Leyen are considered to be a setback for Prime Minister Viktor Orban, who wanted his EU commissioner designate, former justice minister Trocsanyi to be in charge of enlargement. However, that post is likely going to Slovenia.

Hungary has been a vocal supporter of Serbia and Montenegro’s EU integration and has criticised Brussels for not going fast enough during the process.

"The incumbent European Commission has led astray the cause of the enlargement and by doing so it has Europe' security and future," Minister of Foreign Affairs and Trade Peter Szijjarto said recently at an informal meeting of foreign ministers.

The Hungarian government believes membership for the West Balkan countries will decrease migration pressure on the continent. Hence the post would have been a jackpot for Orban, but his government’s track record in hollowing out democratic institutions and weakening the rule of law would have put pressure on the new European Commission president not to go ahead with Trocsanyi’s nomination, local media writes.

Hungary welcomed von der Leyen's appointment as head of the Commission and Orban took credit for torpedoing the bids by Socialist spitzencandidate Frans Timmerman and the European People's Party (EPP) candidate Manfred Weber‎ for the post.

Some MEPs suggested that the nomination of Hungary’s former justice minister may encounter obstacles given that under his leadership the independence of Hungary’s judiciary deteriorated.

The Orban government unexpectedly suspended the launch of the new administrative courts effective from 2020 a few days after the European Parliament (EP) elections. Critics said this was to help pave the way for Trocsanyi’s candidacy as commissioner for EU enlargement.

The controversial bill would have put excessive power in the hands of the justice minister with the right to appoint half of the judges to the new administrative courts, which raised further concerns about the independence of the judiciary.

The move to shelve the bill was seen as a concession by Orban, who has toned down his anti-EU rhetoric following the EP elections when anti-establishment and anti-migration parties failed to make a breakthrough.

Trocsanyi announced on Tuesday that he withdrew his nomination for the vice-president of the European Parliament’s Committee on Constitutional Affairs (AFCO) citing his duties as a new commissioner.

As a consequence, the EPP will soon nominate another Fidesz MEP for the AFCO post. Trocsanyi was selected for the job in July, but the vote had to be postponed due to opposition from a number of leftist parties.

The 63-year old lawyer met von der Leyen twice. After his talks on August 30, he tweeted: "Constructive discussions at second meeting with President-elect @ vonderleyen. I believe Hungary has an important contribution to make to the EU project.”