Hungarian Q4 growth in GDP revised up to 1.4% 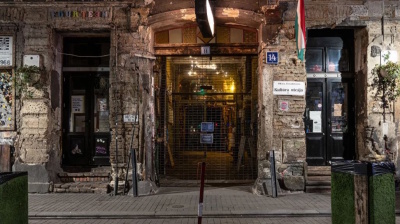 A popular ruin pub in downtown Budapest closed temporarily due to the restrictions in place since mid-November.
By bne IntelliNews March 3, 2021
Hungary’s GDP rose a seasonally- and workday-adjusted 1.4% in Q4 from the previous three-month period, revised up from 1.1% in the first reading, the Central Statistics Office (KSH) said in its second reading of data on March 2. The preliminary data beat forecasts as analysts expected a decline from the third quarter.

The KSH revised the full-year contraction from 5.1% to 5%, below the 6.4% EU average and at the lower end of the government’s revised target.

On the production side, services continued to be the biggest drag, accounting for 3.2pp of the headline decline in Q4. Within services, the logistics sector accounted for 1.1pp of the drop. The farm sector and the construction sector each contributed 0.2pp to the decline, while industry lifted GDP by 0.4pp.

The output of commerce edged up 0.1% in Q4, while the output of commercial accommodations and catering plunged 51.1% as second-wave restrictions came into force. ICT sector output climbed 6.3% and output of the financial and insurance sector grew 3.3%.

On a quarterly basis, services fell just 0.1%, while investments picked up 4.4%, bucking a declining trend.

The upward revision of the Q4 data signals that the spillover effect in 2021 may be stronger than previously estimated, ING said in a note.

Given the significant rebound potential, growth could come in at 5.4% in 2021, analyst Peter Virovacz said, adding that the recovery in some sectors may take much longer.

Downside risk include the prolongation of lockdown due to the third wave, other analysts said.

London-based Capital Economics raised Hungary’s 2021 GDP forecast from 5% to 5.5% after the stronger-than-expected year-end performance of the economy. In a recent rating revision, S&P and Fitch projected  4.6% and 4.9% growth respectively.

The Hungarian economy is more resilient than the EU average and is set to rebound faster than in the aftermath of the 2008 crisis, Finance Minister Mihaly Varga commented.

The government addressed the crisis with tax cuts and investment support schemes and not resorting to austerity measures. With an investment rate of 27.5%, Hungary was among the top ranks in Europe, he added.

Russian industrial output back to 1.1% growth in March

The National Bank of Ukraine (NBU) raised Ukraine’s prime rate by a full percentage point, to 7.5% on April 16, more than analysts anticipated, after inflationary pressures surged in March.

The National Bank of Ukraine (NBU) is expected to raise its prime interest rate on April 15 in order to combat rising inflation, according to a Reuter’s poll of analysts, the newswire reported on April 14.

Romania’s construction works down 0.6% in 2M21
17 hours ago
Turkish Airlines flies only 2.5mn passengers in March
1 day ago
Russian industrial output back to 1.1% growth in March
2 days ago
NBU hikes rate 100bp to 7.5%
2 days ago
NBU expected to hike rates on rising inflation
4 days ago