Hungary delays pension bond issue due to success of MAP+ 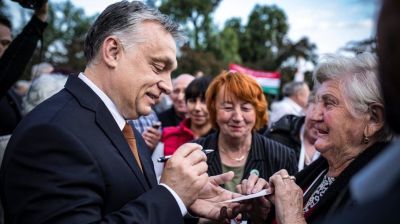 Support for the ruling Fidesz party is the strongest among pensioners
By bne IntelliNews November 14, 2019

Hungary's government has delayed the launch of pension savings bonds due to the success of the new retail bond MAP+, local media reported on November 13.

The finance ministry and the state debt manager, AKK, did not want to launch a new bond issue against a successful bond programme already in place. The scheme is still in the preparatory phase, Finance Minister Mihaly Varga said during a parliamentary committee hearing.

It was exactly a year ago that the first news about the new retirement bond was revealed by Varga. The new bond would complement existing products, such as the pension savings accounts (Nyesz) and voluntary pension funds, which would remain in place.

This was to reaassure clients, who still remember vividly what became known as the "pension grab". In 2010, the right-wing government of Viktor Orban, under an excessive deficit procedure and facing tight budgetary pressures, de facto eliminated mandatory pension funds and nationalised savings of some HUF3 trillion (€9bn).

People were told that savings would be deposited into an individual pension account, but actually the money was transferred to the central budget to reduce state debt.

According to the reports a year ago, the state retirement bonds would be priced similarly to the baby bonds, which carry a 3% premium over inflation, but the premium could vary depending on the age of bond buyer. The long-term bonds would mature when their owners reach retirement age and would either be paid in a lump sum with interest or in monthly instalments. The bond would be available to retail buyers, not institutional investors.

The finance ministry has not revealed any further details on the new retirement bond since the first news appeared.

Currently, there is a 20% state subsidy for pension savings accounts and voluntary pension funds, capped at HUF100,000 (€310) per year. The finance minister confirmed that these subsidies would remain in place.

Weekly sales of Hungarian Government Securities Plus bonds for retail investors reached HUF74bn in the twenty-third week after their launch, lifting total subscriptions to HUF2.6 trillion, according to the latest data. The MAP+, which pays an annualised yield of 4.95% if held for the full five-year maturity, has attracted record demand among retail investors in Hungary.

The government’s goal is to increase the share of government securities to HUF11 trillion by the end of 2022, Varga noted, adding that this was not an unrealistic target, as the stock of cash in the economy is around HUF6.5 trillion, which is one of the highest levels in Europe.

The goal is to finance as much of the country’s debt as possible from domestic sources. The state debt manager will not take out foreign currency loans in 2019.