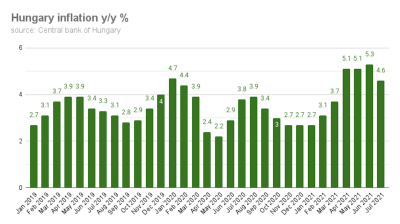 Hungary’s consumer prices rose 4.6% y/y in July, slowing from the peak of 5.3% in the previous two months, the Central Statistics Office (KSH) said on August 10. The headline figure was broadly in line with analysts’ expectations.

CPI has been at the highest level in years and well outside the 2-4% tolerance band of the Hungarian National Bank (MNB).

In July, prices were lifted by the rise in tobacco and fuel prices rising 18.1% and 19.8% respectively. On a monthly basis, inflation reached 0.5%. Core inflation adjusted by tax effects slowed from 3.8% to 3.5%.

In a separate inflation report, the Hungarian National Bank attributed the rise in inflation to base effects relating to the robust rise in fuel and industrial goods prices last year.  Fuel prices contributed 1.3pp to headline inflation, it added.

Underlying inflation remained strong during the period, and the central bank is expected to continue its rate hike cycle that began in June, analysts opined.

The MNB raised the base rate again in July by 30bp to 1.2% following a similar increase in the previous month, marking the first hike in ten years and a shift from ultra-dovish monetary policy.

The slowdown in inflation in July was mainly due to base effects, with the KSH still recording significant overall price increases on a monthly basis, ING Bank senior analyst Peter Virovacz commented.

Service prices surged in the base period as the country was bracing for the reopening after the first wave. This year, the reopening started earlier, and the demand-driven price pressure was visible in June.

The easing of service and fuel inflation explains 0.2pp and 0.3pp of the 0.7pp slowdown in headline inflation.

Core inflation suggests that underlying price pressures remain quite strong in the economy, he added.

Inflationary figures are still close to their multi-year highs, and it is too early to say that inflationary pressures in the economy have eased, K&H analyst David Nemeth commented.

Despite the easing of consumer prices in July, it was necessary for the MNB to begin the rate hike cycle as there are still a number of upside risks to inflation from the second-round effects of higher commodity prices to exploding demand due to the reopening of the economy, according to Takarekbank.

Inflation may ease in the coming months, but the annual rate of price increase may again be substantially above 5% towards the end of the year due to base effects.

The Hungarian National Bank expects the headline CPI to remain over 4% until the end of 2021 and fall below the upper end of the tolerance band at the beginning of 2022. By mid-2022, it could stabilise around the central bank's 3% target.

Prices of bread and flour products in Kosovo jump by up to 50%
14 hours ago
Bank lending in Georgia up 12.9% y/y at end-September
14 hours ago
National Bank of Ukraine leaves key policy rate unchanged at 8.5%
16 hours ago
Kazakh industrial output up 2.7% in first nine months
4 days ago
Slovak unemployment rate at 7.09% in September
4 days ago