Hungary's industrial output picks up in June, but outlook mixed as economy set to slow down 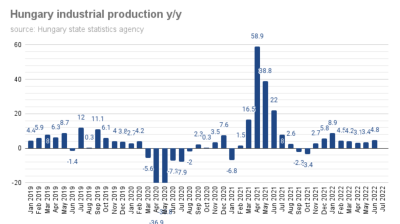 By bne IntelliNews August 7, 2022
Hungary’s industrial production grew 4.8% y/y in June (chart), up from a 3.4% increase in the previous month, according to working-day adjusted preliminary data from the Central Statistics Office (KSH) on August 5. On a monthly basis, output rose 0.6%.

Despite the unfavourable circumstances, notably the Russian-Ukrainian war, the shortage of spare parts and rising energy prices, industrial production expanded both on a monthly and annual basis, and the sector's performance was better than expected

The unadjusted data showed an increase of 1.5%, slowing from 9.4% in May, as there were more workdays than in the base period. Detailed data will be released next week, but KSH said output of the manufacture of transport equipment and that of electronics and optical products increased to a lesser degree, while growth was higher in food and beverage production. Output of other subsectors declined.

Industrial production returned to levels seen at the beginning of the year, which suggests that manufacturers managed to bridge supply disruptions caused by the war, ING Bank Peter Virovacz said.

ING bank is less optimistic about the outlooks in the industry and the economy as a whole, as there are clearly signs of weakening economic activity. The soft landing has already started, it added.

Industrial production has slowed slightly in Q2, after a strong expansion in the previous three months, and was virtually stagnant compared to the previous quarter, Magyar Banholding analyst Gergely Suppan said. The economy could benefit significantly in the medium term from investments by BMW and Mercedes and from the build-up of defence industrial capacities, he added.

Analysts queried by state news agency MTI did not give projections for the sector for 2022.

Hungary to launch national consultation on EU sanctions against Russia

More than 70% of Albanians trust the EU, the UN and Nato compared to only one quarter who trust the president or political parties.

Growth is expected to slow later in 2022 as the war in Ukraine affects tourism and other key sectors.

Demand is still poised to weaken in line with the overall economic slowdown.