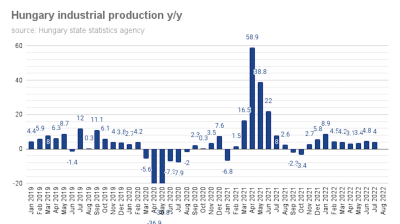 The output of Hungary's industrial sector rose 4.0% y/y in July (chart), picking up from a 1.5% increase in the previous month and above the 3.5% forecast, the Central Statistics Office (KSH) said on September 7. Adjusted for the number of workdays, output climbed 6.6%.

Hungary’s industry has so far proved relatively resilient to the negative effects of the Russia-Ukraine war, the energy crisis and ongoing bottlenecks in supply chains, but the outlook remains uncertain.

A detailed breakdown by sectors is not available, but KSH said the automotive segment and the computer, electronics and optical equipment segment, the two largest branches, increased "to a larger degree", while output of the food, drinks and tobacco products segment expanded "by a smaller degree".

Output rose for the third straight month and was up 1.1% compared to the previous month. In the first seven months, the sector’s performance increased by 4.9% y/y.

Magyar Bankholding remains bullish on the short-term outlook, expecting growth to pick up due to the low base and an easing of the semiconductor shortage. The bank’s economist Gergely Suppan said industrial order stock is very high and new capacities are in the pipeline.

Others see the future as less rosy for the manufacturing sector.

Companies are likely to encounter rising energy prices in the third and four quarters in addition to the deteriorating global environment, which will prove to be a real challenge, Erste Bank said.

The Deputy head of the National Confederation of Entrepreneurs (VOSZ) warned of mass bankruptcies in the SME sector as tens of thousands of business face a 5-7 times increase in energy prices this year, which is likely to climb still further in 2023.

According to Laszlo Perlusz, companies are already struggling with the shortage of raw materials and workforce, driving prices and labour costs higher, and the surge in energy prices could be the last straw for many of them at a time when consumers' purchasing power is expected to weaken.