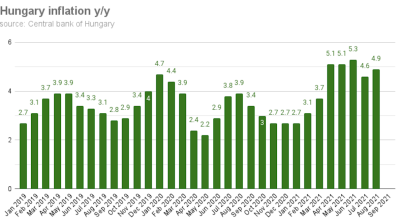 Headline inflation is set to peak around 5.5% in November, according to analysts.
By bne IntelliNews September 9, 2021

Hungary’s headline inflation edged up to 4.9% in August from 4.6% in July, after peaking at 5.3% in June, driven by higher cigarette, spirits and vehicle fuel prices, data from the Central Statistics Office (KSH) on September 8 showed.

CPI stands at the highest level in years and is well outside the 2-4% tolerance band of the National Bank (MNB).

The August figure beat analysts’ consensus by 0.2pp and the central bank’s forecast published in June by 0.5pp. On a monthly basis, the headline data grew 0.2%.

Food prices were up 3.7% y/y, accelerating from a 3.1% y/y growth in the previous month. Analysts said the spill-over from higher agricultural producer prices, up 14% y/y in H1, impacted both raw and processed foods.

Faced with a dire labour shortage driving up wages by double-digits and higher raw material prices, restaurants were forced to push up prices. The cost of eating out has gone up 8% y/y in August.

The central bank said the price hike of market services was flat compared to July, suggesting "the vast majority" of repricing linked to the reopening has already materialised.

MNB's measure of core inflation excluding indirect tax effects – a bellwether indicator of underlying inflation – rose to 3.6% in August from 3.5% in the previous month, while sticky price inflation moved up slightly to 4.8%, reflecting underlying price pressures in the economy.

Driven by robust economic growth, with GDP set for record growth of 7-8% in 2021 and supply and demand mismatches, consumer prices grew at the fastest pace since 2012.

In order to curb surging inflation, the MNB was the first central bank in the CEE region to start monetary tightening.

Policymakers hiked rates by 30bp at the last three meetings, lifting the base rate from a record-low 0.6% to 1.5%. The rate hikes have pushed the EUR/HUF below 348. The Hungarian forint was the best-performing currency globally in August, gaining 2% against the dollar and the euro last month.

After the release of the inflation data, the forint weakened to near 350.

Inflation is set to rise above 5% in the coming months due to base effects, peaking at 5.5-5.6% in November, only to fall sharply from the beginning of next year.

ING Bank sees a similar scenario as the bank expects the headline reading to be above 5% for the remainder of the year, translating into an average 4.6% CPI for 2021, the balance of risk pointing to an even higher actual outcome.

The MNB expects the headline inflation to return to its 2-4% tolerance band in Q1 2022.

EU likely to wait until general elections before imposing sanctions against Hungary
wiiw slashes Emerging Europe growth forecasts for 2022 and 2023
NEMETHY: Is monetary tightening the cure for inflation?