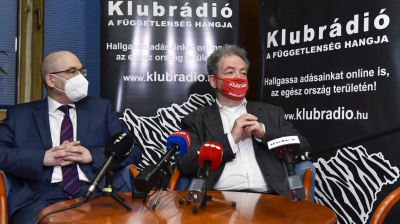 Andras Arato, chairman of radio station Klubradio (right), after the Budapest-based talk radio station critical of the government lost is appeal in court to retain its broadcast license.
By bne IntelliNews April 21, 2021

Hungary has slipped three notches to 92nd out of 180 countries in the latest Reporters Without Borders (RSF) World Press Freedom Index published on April 20, local media reported. Among EU states the worse country for media freedom was Bulgaria. Since 2013 Hungary has slid 36 places, and it now lags behind countries like Albania, Moldavia or Lesotho.

Taking advantage of the pandemic, Viktor Orban’s government has further increased its influence over the Hungarian media, which serves a model for other radical rightwing European governments, such as Slovenia and Poland, according to RSF’s assessment.

After state-of-emergency rules were approved in the spring of 2020 giving the prime minister unlimited powers, decrees passed in parliament threatened journalists with prosecution on charges of disseminating fake news and "blocking the government’s anti-pandemic efforts".

In May 2020 two private persons were detained on charges of spreading fake news after sharing a Facebook post critical of the government, including a local opposition leader living with a disability.

Under the pretext of emergency power regulations the government also posed additional curbs on already limited access of the press to state-held information, extending deadlines for state bodies to release data.

RSF said that the Hungarian Media Council damaged media pluralism because of its political decisions, which included taking away the license of Budapest-based talk radio Klubradio’s frequency. The organization considers the government’s takeover of the country’s largest independent news portal Index.hu to be the most spectacular development in 2020.

By requiring journalists to get permission from authorities and landowners before conducting a drone overflight, or risk a one-year prison sentence, the government showed a readiness to resort to any legislative means possible to obstruct reporting by independent media and to protect the oligarchs that reporters would like to investigate, RFS said in the report.

Hungary's media landscape changed dramatically over the last eight years. Until the end of 2019, it was concentrated in the hands of few oligarchs allied with Orban, who transferred their companies to the Central European Press and Media Foundation (KESMA) in 2019. The antitrust investigation of the transfer of some 500 outlets was blocked by the government.

KESMA outlets operate with vast financial resources from state ads, while independent media is struggling to live off the market. The country’s media market remains under EU scrutiny.

Government-friendly media has often resorted to orchestrated attacks on opposition parties, NGOs, billionaire George Soros and those critical to the government using the same key phrases and terminology, which suggests some sort of coordination.

The Hungarian-born billionaire philanthropist has been at the centerpiece of hate campaigns by Hungary’s illiberal leader Viktor Orban over the years.

Take away assumptions made about floating voters and its standing falls another 7 pp to just 27.1%.

Zoran Zaev visited Brussels after Enlargement Commissioner Oliver Varhelyi raised the possibility of allowing Albania to move ahead of North Macedonia, whose progress is blocked by dispute with Bulgaria.