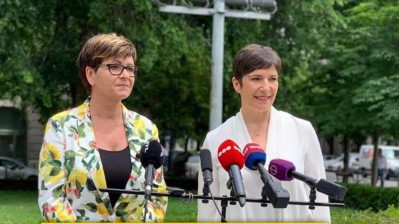 Journalist and television personality Olga Kalman announced her bid to become Budapest mayor in the upcoming local election as an independent candidate with support from the leftist Democratic Coalition (DK) on June 6. So far four opposition politicians have expressed intentions to run for the mayoral election in October.

The party of former PM Ferenc Gyurcsany (DK) became the largest opposition party at the European Parliamentary election garnering 16% of the votes, well above the 10% predicted, which gives them four mandates. Although Gyurcsany remains one of the most unpopular politicians, his wife Klara Dobrev ran on the agenda of a federal Europe.

DK boosted its base by luring disenchanted voters from the Socialists. The Socialist-Dialogue (MSZP-P) alliance won just 6.7%, which means an all-time low for the leftist party which led Hungary between 2002 and 2010. In a parliamentary election, the joint list for the alliance would have meant dropping out of parliament, as in their case the ceiling is 10% and not 5%.

The results have strengthened DK's position to assume the role as the leader of the opposition, said Dobrev, who presented Kalman as an “ardent and uncompromising opponent of Viktor Orbán’s regime.” She said the party has notified Gergely Karacsony, the joint candidate of the opposition MSZP-P.

Kalman said that the public wants new players in Hungarian political life, adding that she and Dobrev would both be glad to see more women in the arena. She said she seeks broad public support and, if she were to win the pre-election, would rely on support from the voters of the Socialist, Momentum, and ruling Fidesz parties. “Restoring Budapest to its residents is a priority,” Kálmán said.

Opposition parties are expected to select their candidates to run against Budapest mayor Istvan Tarlos in two rounds of pre-election voting.

All parties would want “a really exciting political debate,” she said, adding that the decision would not affect DK’s agreements with other leftist opposition parties at the district level. She also confirmed that DK would back the winner of the second round of the pre-election, in the autumn elections.

Pro-EU liberal Momentum nominated businessman Gábor Kerpel-Fronius, the leader of the party’s chapter in Budapest’s 13th district as its candidate earlier this week. The party surprised everyone by securing 10% of the votes on May 26, way above the 5% it got in the polls.

Momentum became the strongest opposition party in 10 of the 23 districts in Budapest and did well in urban areas. Momentum leaders said the decision to run Kerpel-Fronius was made before the EP election.

The party will back Karacsony if he wins the second round of the opposition pre-election ballot to be held at the end of June.

Robert Puzser, an eccentric media personality, is the fourth candidate for the post. He was endorsed by conservative Jobbik and green LMP, but the leftist-liberal withdrew support for him. Puzser will not run in the opposition-initiated pre-election but will stay in the competition.

The three leftist opposition parties, MSZP-P, DK and Momentum, agreed in April to field joint mayoral candidates in most districts of Budapest. The recent EP vote count shows they have a real chance of winning in more than half of the 23 districts in Budapest. Fidesz won some 42% of the votes on average compared to 52% of the national average.

The polls show incumbent mayor Istvan Tarlos at 44-45% of the votes.

Tarlos, who is not a member of the Fidesz party, was re-elected with 49% of the votes for the second five-year term in 2014.

Swiss solar panel maker Flisom will build a HUF12.5bn (€35mn) plant in Kecskemet, it was announced on April 28. The company is going to establish its first high-capacity production unit outside of ... more

Hungary expects the peak of the coronavirus (COVID-19) epidemic in early May and the government has launched a controversial programme to empty tens of thousands of hospital beds to make room for new ... more

Hungary's seasonally-adjusted Purchasing Managers Index (PMI) plummeted to 29.1 points in March from 50.3 in February, showing the impact of the coronavirus pandemic, the Hungarian Association of ... more