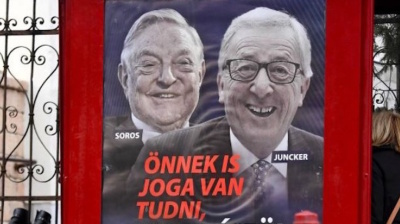 Fidesz' EP campaign poster in 2019 may have been the last straw for many moderates within the EPP.
By bne IntelliNews March 19, 2021

Fidesz deputy-chairman for international relations Katalin Novak, who serves as minister for family affairs, shared on social media a letter notifying the EPP’s secretary-general of her group’s resignation.  "It is time to say goodbye" she wrote on Twitter.

The EPP has supported migration, abandoned its Christian conservative roots and is no longer a rightwing party, she wrote later on social media.

For the EPP, Fidesz's resignation is a relief as the party has long been an embarrassment for the grouping, which had come under fire for failing to discipline the party. EPP President, former Polish PM Donald Tusk, welcomed the news, saying that "Fidesz has left Christian Democracy. In truth, it left many years ago".

Over the years Orban came under pressure for Hungary’s democratic backsliding, its violations of the rule of law, the attacks on the independence of press freedom and the judiciary, but he managed to fend off these criticisms.

Hungary faces proceedings under Article 7 of the EU treaty, and will be subject to a new rule of law mechanism that will increase oversight on the distribution of EU funds once it is approved by the European Court of Justice.

His hardline position against immigration and his anti-EU rhetoric further tainted his relations with the centre-right alliance.

Even EPP moderates were disgusted by the Fidesz’ anti-EU campaign poster for the 2019 EP elections, which may have been the tipping point.

One billboard showed a picture of Hungarian-born billionaire George Soros and then European Commission President, Jean-Claude Juncker together with the capture saying: "You have the right to know what Brussels is planning to do"”.

This was a clear reference to what the government has spread for years, that Brussels is promoting illegal migration with the help of Soros, who has been used as a scapegoat for the migration crisis by Orban.

The EPP suspended the membership of Fidesz MEPs in March 2019. Orban avoided the most embarrassing scenario, expulsion as he had promised to keep to the rules.

Hungary’s illiberal prime minister then turned the 2019 European Parliamentary elections into a referendum on migration and the future of Europe. But his position weakened further within EPP as anti-establishment parties failed to make a breakthrough as he had hoped. Nevertheless, the Hungarian right-wing party remained one of the largest factions in the EPP with 12 MEPs.

The conservative party has remained divided for long on the status of Fidesz. Orban enjoyed the support of the French, Italian, Spanish and Austrian members, while smaller countries, such as Finland, Belgium and The Netherlands, have lobbied for the party's expulsion.

But crucially he had the backing of Germany’s CDU and CSU even as had stepped over the red line numerous times.

Some observers attributed this lenient position to pressure from German business groups, which have established established assembly plants in the country, helped by big incentives and low taxes. These economic ties are vital for Hungary, as Germany accounts for some 30% of the country's exports.

Orban’s recent attempts to torpedo the EU’s seven-year budget and the recovery fund in December was seen as blackmail by many and did not help to improve his tarnished image in the EPP.

Earlier this month, the EPP amended internal party rules with overwhelming support, allowing the suspension of an entire party group and not just individual MEPs.

In a pre-emptive move, Fidesz left the parliamentary group before an eventual expulsion. Cutting off ties entirely with EPP was just a technical issue after that.

The 12 MEPs delegated by Fidesz will work as independent in the European Parliament. One MEP, delegated by the Christian Democratic People's Party will keep his post in the EPP.

As for the future Fidesz is likely to join like-minded nationalists and anti-immigration parties in the European Conservatives and Reformists Group led by Orban’s main ally, the Law and Justice (PiS) of Poland. ECR also includes Giorgia Meloni’s Brothers of Italy party, with whom Orban has established cozy ties.

In a recent interview the Hungarian prime minister said his party is in no rush to find new partners but that there should be a home for Fidesz in Europe with parties that share the same values, those that "do not want migrants" and want to "protect traditional families."

Advocates General says disciplinary measures could damage judges’ independence by allowing the government to punish them for their rulings.

Russia has launched the one-shot Sputnik-Lite anti-coronavirus vaccine, on May 6, that it claims has a 79.4% efficacy, the Russian Direct Investment Fund (RDIF) said in a press release.

US Secretary of State Antony Blinken arrived in Kyiv to meet with President Volodymyr Zelenskiy and Ukraine’s top politicians in a show of solidarity in the face of Russian aggression.

Boyko Borissov denied accusations of links to extortion and torture made by businessman Svetoslav Ilchovski in damning testimony to parliament committee.

Valentin Inzko told the UN Security Council the challenge to Bosnia’s once multiethnic society is led by the Serb member of Bosnia's tripartite presidency, Milorad Dodik.