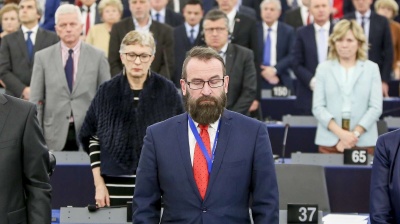 By Tamas Szilagyi in Budapest December 3, 2020

MEP and one of the founders of Hungary's ruling Fidesz, Jozsef Szajer, quit the conservative party on December 2 after Belgian press reported the previous day that he had taken part in a private sex party in Brussels on Friday.

The news that a key ally of Hungarian PM Viktor Orban's anti-LGBTQ party, responsible for the county's Christian-conservative overhaul of the constitution, had escaped a police bust of a sex party during lockdown through the window and climbed down on a drainpipe with drugs in his backpack made headlines globally.

The story broke at a delicate period when Orban is under increased pressure to back down from his veto of the EU budget. Analysts and the ruling party are assessing the fallout of the scandal and possible impact on the 2022 elections.

"We won’t forget or disavow his 30 years of work, but his action is unacceptable and indefensible. After what happened, he made the only right decision by apologising and resigning as an MEP and quitting Fidesz," the prime minister told pro-government media during a break in a cabinet meeting. Reactions and comments from other Fidesz politicians were few and far between on Tuesday. No wonder, as the story about one of the most prominent politicians of the ruling party leaving after 30 years in such a manner came as a shock to everyone.

It took 24 hours for pro-government media, which left out all the details of the sultry story, to come up with at least one kind of narrative to cling to and shore up its dismayed conservative base.

Many wrote they suspect the works of secret services behind the police bust at the sex party, hosted by a 29-year-old man. David Manzheley told Der Standard that he regularly threw private parties, but this was supposed to be small, for just ten people, but 25 showed up.

"There is no music, just sex," he said. Gay men from Brussels' international community attended these events. Szajer came to the party uninvited through a friend, he said, adding that he had known his background. In the interview, Manzheley dropped a line, not picked up Hungarian press, that Szajer himself was an organiser of similar parties in the past.

Conservative commentators are asking: why now? They noted that Szajer disguised his sexual orientation, but it must have been well known to foreign intelligence that he regularly attended gay bars. They point out that the sensitive story came at a crucial time when Orban is fighting for the country's sovereignty. To follow up on the official government communication line they argue that foreign powers are trying to weaken Hungary's positions in the crucial talks over the veto of the EU seven-year budget and recovery fund. Social media is also full of conspiracy theories but memes as well, mostly with puns on drainpipes and funny pictures.

After the police bust, Szajer was taken home to identify himself as he had no documents with him. According to police reports, drugs were found in his backpack, but the 59-year denied taking them at the party and the possession of ecstasy pills.

The recent case seriously conflicts with those conservative values and family policies propagated by Fidesz as Szajer was the author of the new constitution, wrote Gabor Vona, the former head of Hungary's right-wing opposition party Jobbik. In the 2018 election campaign pro-government media hunted down Vona with false accusations about his alleged homosexual relations.

With the resignation of Szajer, Orban is losing one of his most important people in the European Parliament at a time when Hungary's leader is becoming isolated in European politics. Even critics of Szajer acknowledged his skills, competence and ability to make compromises.

Szajer, who was among the most influential figures in Fidesz in the early days, had served as a bridge between Orban and the European People's Party (EPP) since he took the job in 2004, after 14 years in parliament and working as a caucus leader in opposition and when in power. According to sources speaking to Hungarian media, Szajer had clear aspirations to become fraction leader of the EPP when he left Hungary.

His position weakened considerably after Orban took his illiberal turn and ratcheted up his anti-EU rhetoric from 2015. It became increasingly difficult for him to defend the government's policies, but his political savvy and loyalty prevailed, people close to him told Hungarian media.

Szajer was reportedly mulling his resignation before the European Parliament elections in 2019, but backed down after Orban insisted that he run. Aides say he took it hard when the prime minister picked Tamas Deutsch over him to lead the Fidesz MEP group in the European Parliament. Since then, he was barely noticeable and completely withdrew from debates.

It is telling that Szajer first informed European Parliament president David Sassoli of his plans to resign on Sunday and not his party, political analysts pointed out. They expect that his departure will accelerate the exit of Fidesz from the EPP, which suspended the Hungarian party's membership in March 2019.

“What else should Fidesz do for all of you to see that they simply don’t fit in with our family?” tweeted EPP fraction leader Donald Tusk, a critic of Orban, on the news. Tusk has been a vocal supporter of kicking the Hungarian conservatives out from the biggest European party family.

This could happen when EPP leaders convene after the pandemic, according to press reports.

In the meantime EPP officials kick-started a signature drive aiming for the expulsion of Tamas Deutsch, who made derogatory comments about EPP officials.

Fidesz remains by far the strongest party in Hungary but the economic fallout of the pandemic, which is claiming more than 100 lives a day, is eroding its popularity, A recent survey showed that more people would vote for the joint list of the opposition than the ruling party, which must have rung alarm bells at the party HQ.

Orban has successfully used his nationalist and anti-immigration rhetoric to solidify his base, and he is bracing his supporters for a clash in 2022, when the next election is due. He regularly presented himself as the defender of Christian conservative values but recent scandals could seriously undermine his credibility.

The former Olympic champion managed to hold on to this post with a narrow victory, but he was forced to quit a few weeks later. After three successive supermajority wins by Fidesz, opposition parties made gains and many analysts said this was partly due to the sex scandal.

Earlier this year, the Hungarian ambassador to Peru was removed from his post after thousands of child pornography photos were found on his devices. The diplomat was trapped down in an international operation and was sneaked back to Hungary secretly. Hungary's flagship online news site Index.hu uncovered the scandal. In the summer Gabor Kaleta was handed down a one-year suspended prison sentence and was fined HUF540,000 (€1,500). He pleaded not guilty in court. His decision to appeal the court’s verdict caused an uproar and led to the government toughening regulations on child sex offenders.

Andrew Meier had a good joke about the problems post-Soviet countries face with their oligarchs: "What is to be done with those who are to blame."

Small nation enters new year battered and bruised by the pandemic and defeat in the autumn war with Azerbaijan. A modest economic rebound is within reach should the peace hold.

OUTLOOK 2021 Romania
25 days ago
LONG READ: The oligarch problem
1 day ago
OUTLOOK 2021 Armenia
3 days ago
One of Russia’s biggest wood product companies, Segezha could be Sistema’s next IPO
3 days ago
COVID-19 and Trump’s indifference helped human rights abusers in 2020
4 days ago