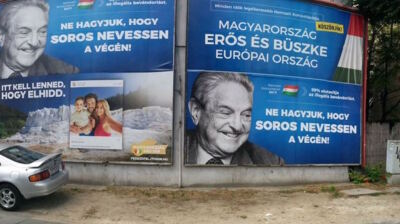 The Hungarian government has repeatedly accused billionaire George Soros of plotting to destabilise the continent by allowing millions of migrants to settle.
By bne IntelliNews November 17, 2021

The Hungarian legislation criminalising assistance to asylum-seekers violates European Union rules, the Court of Justice of the European Union (CJEU) ruled on November 16.

"Criminalising such activities impinges on the exercise of the rights safeguarded by the EU legislature in respect of the assistance of applicants for international protection," the CJEU said.

Such restrictions cannot be justified by the objectives relied on by the Hungarian legislature, namely the prevention of the assistance of misuse of the asylum procedure and of illegal immigration based on deception, according to the ruling.

The Hungarian government has repeatedly accused the billionaire of plotting to destabilise the continent by allowing millions of migrants to settle. Viktor Orban's illiberal government has waged ruthless campaigns against Soros not just in the 2018 election campaign but since the start of the migration crisis in 2015.

Orban has demonised the liberal philanthropist – seen as the illiberal Hungarian prime minister’s public enemy no. 1, which has gained him immense popularity and a third supermajority victory in April 2018.

The bill defined the promotion of illegal migration as an organised activity that illegally helps a person not in danger of persecution to submit an asylum request or to obtain a title of residence. People found guilty of financially supporting illegal migration face criminal prosecution and one year of imprisonment.

The 'Stop Soros' law also called on NGOs that "support migration activity" to register with the Hungarian tax office and pay a 25% levy. Later that clause was withdrawn.

The CJEU also found that Hungary had failed to respect EU rules when its authorities rejected an application for asylum because the person had arrived from another EUmember state where their life or well-being was not in danger.

Human rights group Amnesty International welcomed the verdict, saying it “sends an unequivocal message that the Hungarian government’s campaign of intimidation, targeting those who stand up for the rights of refugees and asylum-seekers, cannot and will not be tolerated”.

"But we all know that the real source of irritation for the bureaucrats in Brussels is that we recognised the support and advancement of illegal migration as a criminal act," she added.