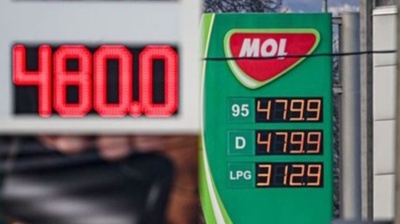 Hungary's government scrapped the HUF480 per litre (€1.2) price cap on fuel on December 6 with immediate effect after unprecedented chaos at petrol stations sparked by rumours of the imminent end of the cap.

The cap had previously been extended to the end of December. Now 95-octane petrol will cost HUF641 per litre and diesel just below HUF700 per litre.

The chaos and the hike in prices are a huge embarrassment to Prime Minister Viktor Orban, who introduced the cap in November last year to ease rising inflation before the election this spring where he won a fourth term. The government's incompetence over the fuel price cap adds to the mounting feeling of economic crisis in the country.

The company informed the energy minister on Monday that it would be unable to ensure supplies without imports, Hernadi said, adding that in the past days, turnover has almost doubled from last year, and was up by 2.5-fold from 2020.

A quarter of station pumps had run dry at some point in the past few days, an unprecedented occurrence during MOL's existence. MOL failed to fulfil 871 orders from corporate customers, he said.

Demand for petrol in the past week was double last year's level, while for diesel it was 1.5 times higher, while imports have dropped heavily, MOL managing director, Gyorgy Bacsa, told public radio earlier on December 6. "We're struggling to catch up," the company's managing director said. "About a quarter of the entire network is totally dry," he added.

MOL has been working around the clock to fill up depleted fuel stations and is making up the shortfall from imports from its Slovakian refinery. One out of four litres of diesel was supplied from Slovakia last month, but MOL has reached the limits of its logistical capacity, Bacsa added.

Hernadi said that building back imports to the Hungarian market is essential, as new EU oil sanctions slated to enter into force on refined oil products on February 5 are expected to create a "new crisis" because MOL will not be allowed to import Russian oil products from Slovakia. Russian diesel banned from the EU will be blocked from the European markets, and this accounts for 10% of the market, he warned.

Analysts have warned of the negative impact of price caps in force since November 2021.

MOL's total capacity was not sufficient to satisfy demand on the Hungarian market as roughly 30% of imports disappeared after the government capped wholesale prices at HUF480 per litre in the spring after putting a ceiling on the retail price at the same level in November 2021.

To reduce demand, the cabinet narrowed the eligibility to subsidized prices in the past six months, which applied to Hungarian drivers of privately owned vehicles, farm vehicles and taxis.

The Hungarian company coped with rising demand in the summer after maintenance work at its refinery in Hungary by tapping strategic reserves.

The situation was aggravated in the last couple of weeks by a technical glitch at the Szazhalombatta refinery following  regular maintenance work. The facility has been operating at 50-55% capacity, affecting all of MOL's products.

The company restarted its refinery  close to Budapest on Tuesday after a period of maintenance, but warned that it will take several weeks to reach full capacity, and supply problems "won't be resolved overnight".