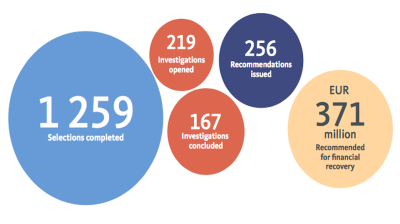 The European Anti-Fraud Office (OLAF) carried out the highest number of investigations in Hungary among EU members last year and closed the most cases with recommendations, according to the annual report released on September 3.

Hungary also tops OLAF's list of countries where the agency made a financial recommendation to recover EU funds in the period between 2014 and 2018.

Due to the high number of irregularities between 2014 and 2018, Hungary is recommended to recover the highest ratio of EU funds (3.84%) from this period compared to the 0.45% EU average. Only Slovakia comes close to Hungary in that aspect with 2.84%, but the rest of the countries are below 0.5%.

The use of the EU’s structural funds remains at the core of OLAF’s investigative activity, it said. In Hungary, most inspections generally concerned larger projects involving the use of structural and investment funds.

The report explicitly mentions a case where two closely affiliated companies received a combined €12mn to develop broadband networks. The companies contracted these projects to the same general construction company, which further subcontracted the job, and this went on for four further levels.

The aim of this complicated chain of contracts was to get €4.9mn back to one of the original two companies, the report said. OLAF asked the Hungarian authorities to launch a probe into the case and recommended the European Commission to recover €3.6mn.

OLAF revealed severe irregularities and traces of organised fraud linked to a company once co-owned by the son-in-law of Viktor Orban in a report released last year. The company has won dozens of public tenders across Hungary to modernise street lighting for €40mn in total.

The anti-graft agency recommended that the European Commission order the repayment of the entire EU funding. Earlier this year, the government implicitly acknowledged fault in the Elios case, as it chose not to submit invoices to Brussels for reimbursements of EU funds related to a high-profile corruption case.

Although the report, released months before the April general election, was embarrassing for the ruling party as it highlighted the widespread and rampant corruption close to the prime minister's inner circles, it did little political damage. A few months later Fidesz won with a sweeping supermajority in the general elections.

Hungarian opposition parties earlier this year collected some 700,000 signatures in support of getting Hungary to join the European Public Prosecutor’s Office (EPPO) as Hungary’s prosecution office has ignored even the most rampant corruption charges linked to businessmen close to the government.

This may not be surprising given the carrier of Hungary's chief prosecutor Peter Polt, who was a member of the ruling Fidesz party between 1993 until 2000 when he was appointed to the post. Orban reappointed him to the post in 2010.

The OLAF report also shows that between 2012 and 2018, the Hungarian authorities opened 20 investigations upon OLAF recommendations but charges were only pressed in nine cases.