Hungary under fire over legislation that gives sweeping powers to government 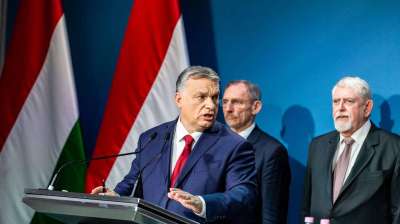 PM Viktor Orban at the press briefing of the coronavirus task force on March 23
By Tamas Szilagyi in Budapest April 1, 2020

Hungarian legislation granting extraordinary powers to the government for an unlimited period will come under scrutiny by the European Commission and the European People's Party (EPP), where calls to expel Fidesz have come up again.

The European Commission will analyse the legislation, which included provisions criminalising fake news, the EC's chief spokesperson Eric Mamer said on April 1. Commission President Ursula von der Leyen acknowledged the need for member states' governments to "have the necessary tools to act rapidly and effectively to protect the public health of our citizens" but added that "it is of utmost importance that emergency measures are not at the expense of our fundamental principles and values as set out in the Treaties.”

The next day the Hungarian government introduced a new law that would end legal gender recognition for transgender people. The bill was submitted as attention was focused on the introduction of a controversial set of measures ostensibly aimed at fighting coronavirus and proposes that gender should be defined as “biological sex based on primary sex characteristics and chromosomes” as well as setting up a register that records  people’s “sex at birth” in the Hungarian civil registry and thus make it impossible to change anyone’s legally recognised gender.

Opposition parties signalled support for the government's efforts to fight the pandemic but rejected the bill as it was open-ended without a sunset clause. Prime Minister Viktor Orban downplayed criticism saying parliament would have the right to rescind the state of emergency any time, but with less than one-thirds of the seats, the opposition would need support from the governing party. Hungary declared a state of emergency over the migrant crisis in 2015, which is still in force.

Previously, the EU moved forward with an Article 7 procedure against Hungary in September for breaching fundamental rights, which could end up stripping the country of its voting rights. However, this would require unanimous support from all members, and Hungary and Poland have agreed to block any sanctions targeted against the other.

On Wednesday, the Danish Conservative People's party called for the expulsion of Fidesz from the centre-right European political family, the EPP. "For too long we have watched the democratic decline in Budapest!" MEP Pernille Weiss tweeted. The party has sent a letter to EPP president Donald Tusk.

The EPP suspended the membership of Fidesz in March 2019 and assigned a three-member delegation, referred to as the three wise men, to look into Hungary’s compliance with rule of law issues.

According to local media Orban only met the team twice, and he refused to budge on the major issues, causing a rift between the EPP and Fidesz. The report was discussed at the assembly meeting of the EPP in February, but there was no majority to expel Orban's party due to objections from German conservative CDU and CSU.

After the calls by the Danish conservatives Tusk said the centre-right party will have to review its position on Fidesz’ membership.

In an open letter to the EPP members, he wrote that the emergency legislation was justified by the coronavirus (COVID-19) epidemic but it is politically extremely dangerous and morally unacceptable to use a pandemic to declare a permanent emergency.

The US embassy in Hungary also issued a statement with unveiled criticism of the extraordinary powers granted to the government without a sunset clause.

Any emergency measures taken should be targeted to address the COVID-19 crisis. Governments should ensure such powers are restricted to the period of time needed to address the current crisis and lifted as soon as they are no longer needed, according to the statement

"We urge them [governments] to avoid undue restrictions on essential human rights and fundamental freedoms, including the ability of the free press to provide information to the public about the crisis and the government’s response,” the statement said.

US politician Bernie Sanders, one of the main contenders to become the Democratic Party’s presidential candidate, also reacted on social media to the vote allowing Orban to govern by decrees without any sunset clause.

“Throughout history, authoritarian leaders have used moments of crisis to seize unchecked power. Hungary’s Orban is the latest example. Now more than ever we must stand up for democracy and rule of law,” Sanders reacted to the parliamentary vote in Hungary.

Hungarian President Janos Ader signed the bill into law on Monday, hours after the vote, saying it was in accordance with the constitution and did not infringe on any international agreement.

Foot traffic at Russia’s leading malls jumps as rebound gets underway
13 hours ago
Armenia’s coronavirus plight worsens with more than 1,000 more infections in two days
22 hours ago
Authorities “may be sowing seeds of Turkish economy’s downfall” by pumping money at fastest rate for more than decade
1 day ago
Turkey’s electricity consumption collapses 17% in May
2 days ago
Russian government presents National Recovery Plan to President Putin
2 days ago