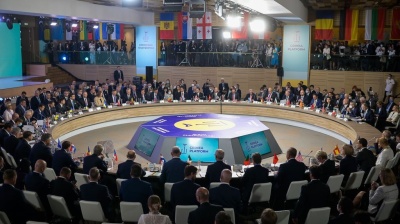 The inaugural Crimea Platform Summit was attended by more than 40 international delegations in Kyiv, and while it didn't recommend any concrete actions it did firmly put the Crimea issue back on the international agenda, a PR coup for President Zelenskiy.
By FPRI BMB Ukraine August 26, 2021

The inaugural Crimea Platform Summit was attended by more than 40 international delegations in Kyiv on August 23. Though it didn’t result in concrete steps or further sanctions aimed at reversing Russia’s 2014 annexation of the peninsula, the summit succeeded in bringing this issue back to the international agenda. 46 delegates, including 14 heads of state, gave speeches in support of Ukraine, most of which concluded with “Crimea is Ukraine.”

As many experts noted, there are several mechanisms on Donbas (like the Trilateral Contact Group or the Normandy format), but none on Crimea. Ukraine itself started working on a de-occupation strategy back in February. “This issue, which for more than seven years was not discussed in such a practical context, today, in an international format, is a priority for our international friends and partners,” Ukrainian President Volodymyr Zelenskiy said.

The summit’s participants also signed a joint declaration, condemning human rights violations and the “continued change of the demographic structure” in Crimea, as well as the “ongoing militarisation” on the peninsula and in the Black Sea, and the “impediments to navigational rights and freedoms” in the Sea of Azov and the Kerch Strait.

The delegations promised to unite their efforts to address these issues with a list of non-binding commitments that presented no major changes relative to the position of the international community. The participants also agreed to take part in a new “consultative and coordination format” that will outlive the summit.

In a provocative address to the press after the event, Zelenskiy invited Russia to participate in the next summit “to fix its historic mistake.” Moscow issued an angry statement refusing the invitation to what it considers to be an event of a “cynical anti-Russia nature” and “an encroachment on the Russian Federation’s territorial integrity, which will have an inevitable impact on our relations.”

Overall, the main world powers did not participate at a high level, showing a lack of interest in the question of Crimea. With Afghanistan burning on the world’s agenda, there were many last-minute shuffles. US President Joe Biden, with whom Zelenskiy is supposed to meet in Washington on August 31, wasn’t present despite earlier announcements that he would attend. Amid tensions over Nord Stream 2, Germany sent Economic Affairs and Energy Minister Peter Altmaiers. On the French side, Paris was represented by the minister delegate in charge of foreign trade instead of Foreign Affairs Minister Jean-Yves Le Drian.

Le Drian made it to Kyiv the next day, to attend the 30th independence anniversary celebrations, the other main event of the week. This very political anniversary event sent yet another signal to Moscow, many experts suggested. For the first time since Zelenskiy’s election, a military parade showcased Ukraine’s main land, air and inland military assets, and more than 5,000 Ukrainian soldiers marched through Kyiv alongside servicemen from Nato member countries. “It is possible to temporarily occupy territories, but it is impossible to occupy people’s love for Ukraine,” Zelenskiy said in his Independence Day speech, adding that the Donbas and Crimea “will come back.”

A case filed by Armenia against Azerbaijan in the International Court of Justice could have significant implications for the conflict. And it carries risks for both Armenia and Azerbaijan.

In the push for reducing carbon, significant investment will be necessary, and in turn, funding will be required. This will provide growth for the credit market, and in particular for anything associated with ESG.

In times of crisis there is a fight to quality by bond traders who are keen to reduce their risks. However, in this crisis the countries of Central Europe have done surprisingly well thanks to ECB support.

With the rapid economic recovery phase now behind us and the peak of the fourth COVID wave just ahead, the Romanian economy is starting to feel the need for additional growth drivers.

The Communist Party of the Russian Federation massively improved its standing following the elections for a new Duma, but was robbed of the much larger share it actually won. The question now is what – if anything – can the KPRF do?