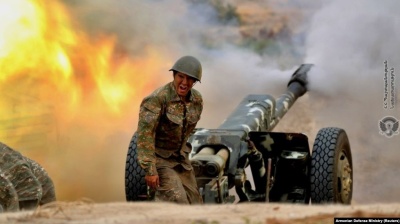 The fighting appears to be the most intense since the Nagorno-Karabakh War ended in 1994.
By bne IntelIiNews October 1, 2020

Armenian President Armen Sarkissian on September 30 stepped up Armenia’s efforts to persuade the international community to intervene in the Nagorno-Karabakh battle with Azerbaijan, asking an interviewer if they could “imagine the Caucasus becoming another Syria?”

“The international community has to realise that if you don’t interfere now, then the Caucasus will become another huge problem,” Sarkissian added in the CNBC interview.


The clashes in Nagorno-Karabakh—a self-proclaimed mountainous republic controlled by ethnic Armenians for three decades but internationally recognised as part of  Azerbaijan—appear to be by far the worst since before the 1994 ceasefire declared after the six-year Nagorno-Karabakh War. The intense fighting on at least two or three fronts entered its fourth day on September 30, showing no sign of easing. Both sides were using armed drones, tanks, helicopters and multiple-rocket systems. Amid the claims and counter-claims, getting accurate estimates of the civilian and military casualty figures is not possible. But dozens and perhaps even hundreds have been lost on both sides.

Yerevan claims close ally of Azerbaijan Turkey is heavily involved in the conflict. It says there are Turkish military advisers directing operations on the ground and in the air and that there is extensive use of Syrian militiamen mercenaries deployed by Ankara, Turkish armed drones and Turkish F-16 warplanes. September 30 saw Armenia post photographs online of what it said was the wreckage of an Armenian SU-25 fighter plane shot down in Armenian airspace by a Turkish F-16 the previous day. Turkey has denied all the claims Yerevan has made about its role in the armed clashes, although it has said it will provide Azerbaijan with military assistance if it is asked to do so by Baku. It says the claims about the shooting down of the Armenian jet were made up as part of a propaganda effort.

The Guardian on September 30 claimed to have evidence that at least three Syrian fighters have been killed in the conflict and reported that several men in Syria’s last opposition stronghold of Idlib province had told its correspondent this week that military commanders and brokers had offered them work guarding observation posts and oil and gas facilities in Azerbaijan on three or six month contracts at Turkish lira 7,000-10,000 ($910-$1,300) a month. Reuters has published similar evidence of the involvement of Syrian militiamen in the fighting.

Russia’s foreign ministry also on September 30 mentioned reports that fighters from Syria, as well as Libya, were being sent to join the fighting, without stating who was sending what it called “illegal militia members”.

Hitting out at Turkey, Sarkissian noted in his interview that Ankara was presently also aggressively involved in the Mediterranean, Greece, Libya and Iraq. “They are creating problems everywhere,” he said.

James Stavridis, a retired US Navy admiral and former supreme allied commander of Nato, who is now a Bloomberg Opinion columnist, on the same day wrote: “While I’ve been in the region several times when tensions were high, this time feels dangerously different. Washington is utterly distracted by the upcoming election. Turkey and Russia are on opposite sides (as they are in Syria and Libya as well). And the European Union is absorbed by the Brexit endgame and tensions at sea in the eastern Mediterranean between Greece and Turkey. NATO, which still has partnerships with Armenia and Azerbaijan, says ‘both sides should immediately cease hostilities’ and there is ‘no military solution to this conflict,’ but offers no concrete proposal.

“The chances of a peaceful settlement seem bleak. A new version of the Minsk group [for intermediation] that would include Turkey could build confidence for a deal. Putin is close to the leaders of both countries, although Russia tilts strongly to fellow Christian Orthodox Armenia. Perhaps the U.S., Russia and Turkey, working together, could convince the two sides to turn away from the catastrophic path they are headed down.”

The question of Russia intervening in the conflict on Armenia’s side—although Moscow also has good relations with Azerbaijan, it is seen as closer to Armenia, where it has military bases—was explored by Riddle, with Ivan Preobrazhensky concluding that any such assistance was unlikely to be triggered by mutual membership of the Collective Security Treaty Organization (CSTO).

However, Preobrazhensky added: “A more likely reason for the Kremlin to intervene and abandon neutrality is Turkey’s involvement in the conflict. The defeat of Armenia in the eyes of many will also be the defeat of Russia, a threat to its influence in the region. In the rest of the world this will be explained by the weakness of the Kremlin.”

Russian Foreign Minister Sergei Lavrov said on September 30 that Russia was willing to host his Armenian and Azerbaijan counterparts for talks, adding that Russia would continue to work both independently and together with other representatives of the Minsk group of the Organization for Security and Cooperation in Europe (OSCE) to mediate in the conflict between Azerbaijan and ethnic Armenian forces. Georgia also made an offer to host peace talks.

France has a sizable ethnic Armenian population and French president Emmanuel Macron, already at loggerheads with Turkish counterpart Recep Tayyip Erdogan in the dispute over oil and gas drilling rights in the eastern Mediterranean and over Turkey’s aggressive involvement in Libya and Syria, said on September 30: “France remains extremely concerned by the warlike messages Turkey had in the last hours, which essentially remove any of Azerbaijan’s inhibitions in reconquering Nagorno-Karabakh. And that we won’t accept.”

Azerbaijan is the 24th largest crude oil producer in the world and supplies about 5% of Europe’s oil and gas needs, according to the International Energy Agency (IEA). It has three crude oil export pipelines and two main gas export pipelines, but despite fears this crucial infrastructure could be at risk, Sarkissian told CNBC that concerns about disruption were exaggerated.

“They are saying there’s a threat to international energy pipelines, which is absolute nonsense,” Sarkissian said. He pointed out the pipeline had been in place for 20 years and “there’s absolutely no threat to energy.”

If we had “the intention of shooting the pipeline, we’d have done that 20 years ago, but not now,” Sarkissian added.

It's been on the Kremlin’s agenda for years, but now the Russian economy is finally being rapidly digitised. Russia's leading supermarket chain X5 has launched a radical transformation of its business.

The taxman is annoyed by how much revenue is lost on online payments.

Russia’s leading discount store Fix Price’s promise is you can buy anything in the store for RUB199, or about $2.60. And that is just what consumers want as the company reports 15 quarters in a row of double-digit growth

After a near-miss debt crisis in 2015-16 Russia’s Ministry of Finance took direct control of the worst cases. But now the finances all Russia's regions are under pressure again as they struggle to cope with the corona-shock and soaring costs.