This year will be bad for the global economy but next year is going to be worse. A third of the world's countries are expected to go into recession and the chances of an EM debt crisis is growing. / bne IntelliNews
By Pierre-Olivier Gourinchas Economic Counsellor and the Director of Research of the IMF. October 11, 2022

One-third of the world economy will likely contract this year or next amid shrinking real incomes and rising prices.

The global economy continues to face steep challenges, shaped by the Russian invasion of Ukraine, a cost-of-living crisis caused by persistent and broadening inflationary pressures, and the slowdown in China.

Our global growth forecast for this year is unchanged at 3.2%, while our projection for next year is lowered to 2.7% – 0.2 percentage points below the July forecast.

The 2023 slowdown will be broad-based, with countries accounting for about one-third of the global economy poised to contract this year or next. The three largest economies, the United States, China, and the euro area will continue to stall. Overall, this year’s shocks will re-open economic wounds that were only partially healed post-pandemic. In short, the worst is yet to come and, for many people, 2023 will feel like a recession. 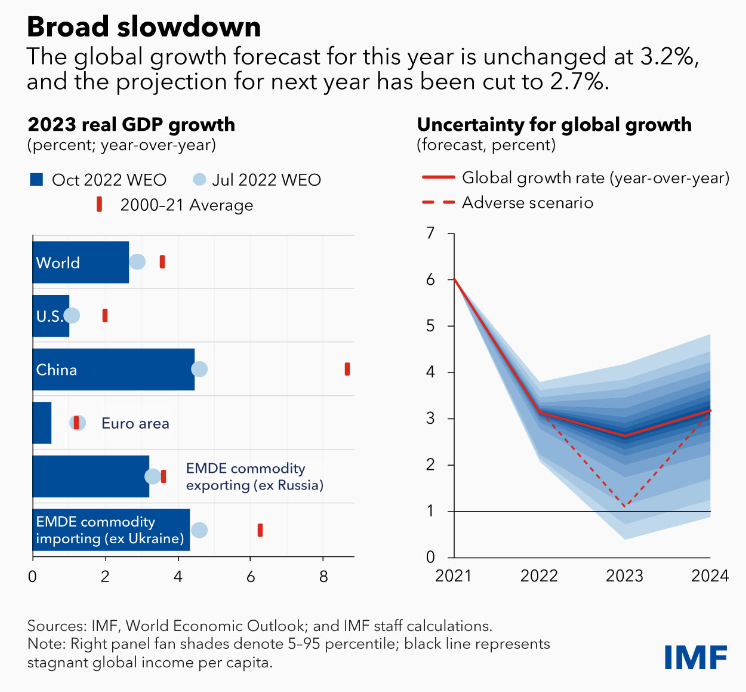 In the United States, the tightening of monetary and financial conditions will slow growth to 1% next year. In China, we have lowered next year’s growth forecast to 4.4% due to a weakening property sector and continued lockdowns.

The slowdown is most pronounced in the euro area, where the energy crisis caused by the war will continue to take a heavy toll, reducing growth to 0.5% in 2023.

Almost everywhere, rapidly rising prices, especially of food and energy, are causing serious hardship for households, particularly for the poor.

Despite the economic slowdown, inflation pressures are proving broader and more persistent than anticipated. Global inflation is now expected to peak at 9.5% this year before decelerating to 4.1% by 2024. Inflation is also broadening well beyond food and energy. Global core inflation rose from an annualised monthly rate of 4.2% at end-2021 to 6.7% in July for the median country. 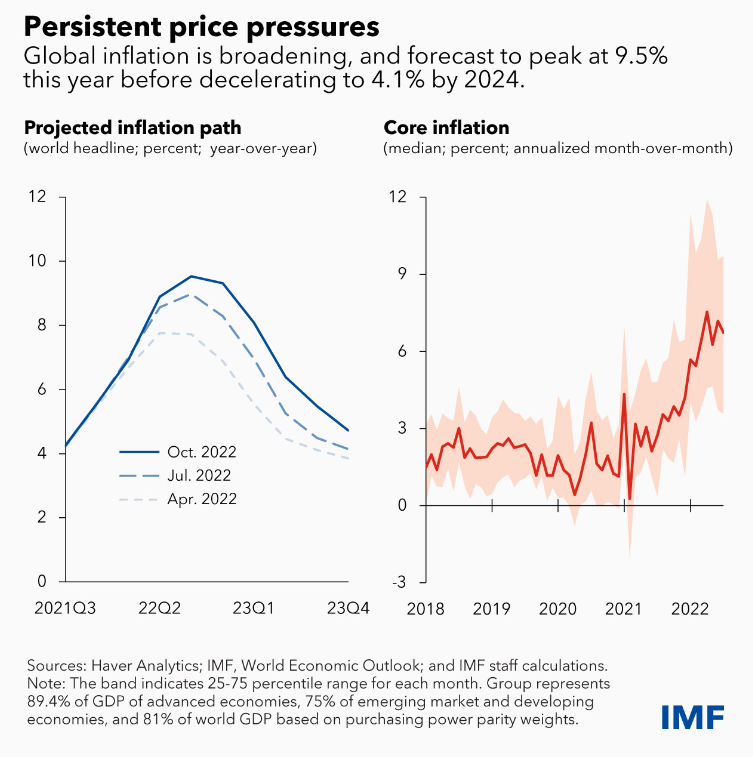 Downside risks to the outlook remain elevated, while policy trade-offs to address the cost-of-living crisis have become more challenging. Among the ones highlighted in our report:

Our latest outlook also assesses the risks around our baseline projections. We estimate that there is about a one in four probability that global growth next year could fall below the historically low level of 2%. If many of the risks materialise, global growth would decline to 1.1% with quasi stagnant income-per-capita in 2023. According to our calculations, the likelihood of such an adverse outcome, or worse, is 10 to 15%.

Increasing price pressures remain the most immediate threat to current and future prosperity by squeezing real incomes and undermining macroeconomic stability. Central banks are now laser-focused on restoring price stability, and the pace of tightening has accelerated sharply.

There are risks of both under- and over-tightening. Under-tightening would further entrench inflation, erode the credibility of central banks and de-anchor inflation expectations. As history teaches us, this would only increase the eventual cost of bringing inflation under control.

Over-tightening risks pushing the global economy into an unnecessarily severe recession. Financial markets may also struggle with overly rapid tightening. Yet the costs of these policy mistakes are not symmetric. The hard-won credibility of central banks could be undermined if they misjudge yet again the stubborn persistence of inflation. This would prove much more detrimental to future macroeconomic stability. Where necessary, financial policy should ensure that markets remain stable. However, central banks need to keep a steady hand, with monetary policy firmly focused on taming inflation. 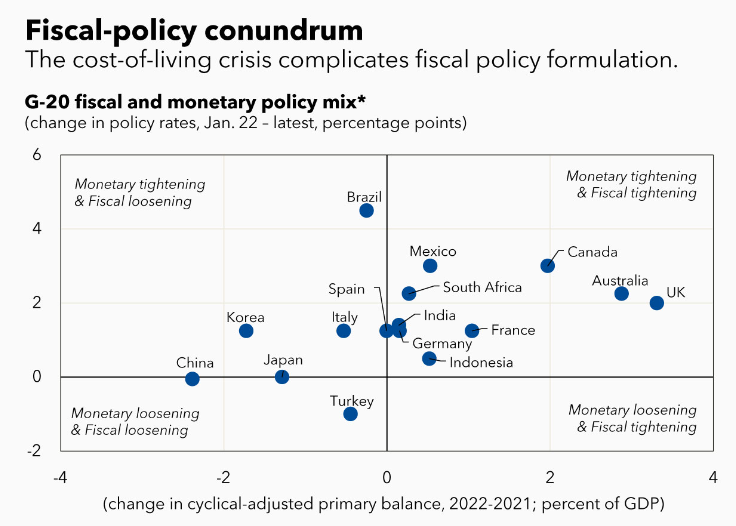 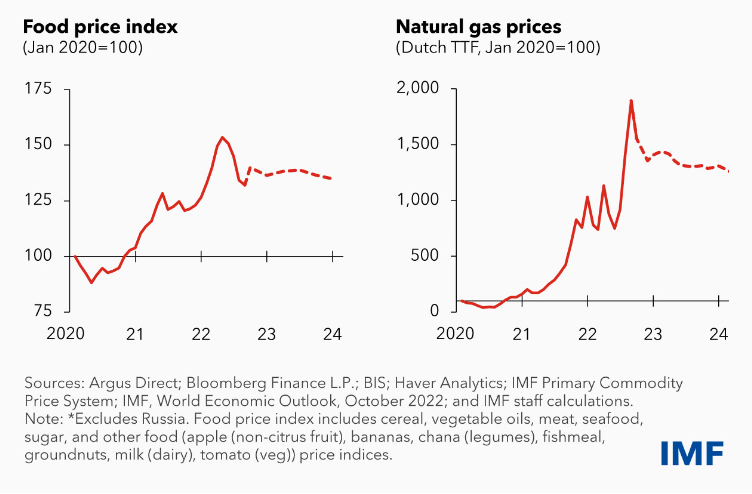 Formulating the appropriate fiscal response to the cost-of-living crisis has become a serious challenge. Let me mention a few key principles.

First, fiscal policy should not work at cross-purpose with monetary authorities’ efforts to bring down inflation. Doing so will only prolong inflation and could cause serious financial instability, as recent events have illustrated.

Secondly, the energy crisis, especially in Europe, is not a transitory shock. The geopolitical realignment of energy supplies in the wake of the war is broad and permanent. Winter 2022 will be challenging, but winter 2023 will likely be worse. Price signals will be essential to curb energy demand and stimulate supply. Price controls, untargeted subsidies or export bans are fiscally costly and lead to excess demand, undersupply, misallocation and rationing. They rarely work. Fiscal policy should instead aim to protect the most vulnerable through targeted and temporary transfers.

Effects of a strong dollar

For many emerging markets, the strength of the dollar is a major challenge. The dollar is now at its strongest since the early 2000s, although the appreciation is most pronounced against currencies of advanced economies. So far, the rise appears mostly driven by fundamental forces such as tightening US monetary policy and the energy crisis. 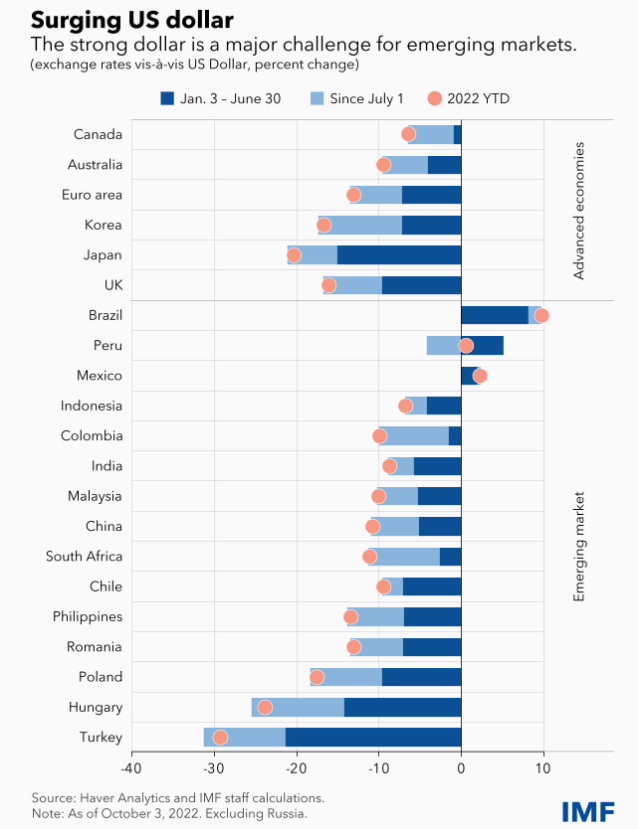 As the global economy is headed for stormy waters, now is the time for emerging market policymakers to batten down the hatches.

Eligible countries with sound policies should urgently consider improving their liquidity buffers, including by requesting access to precautionary instruments from the Fund. Countries should also aim to minimise the impact of future financial turmoil through a combination of pre-emptive macroprudential and capital flow measures, where appropriate, in line with our Integrated Policy Framework.

Too many low-income countries are in or near debt distress. Progress towards orderly debt restructurings through the Group of Twenty’s Common Framework for the most affected is urgently needed to avert a wave of sovereign debt crisis. Time may soon run out.

The energy and food crises, coupled with extreme summer temperatures, are stark reminders of what an uncontrolled climate transition would look like. Progress on climate policies, as well as on debt resolution and other targeted multilateral issues, will prove that a focused multilateralism can indeed achieve progress for all and succeed in overcoming geoeconomic fragmentation pressures. 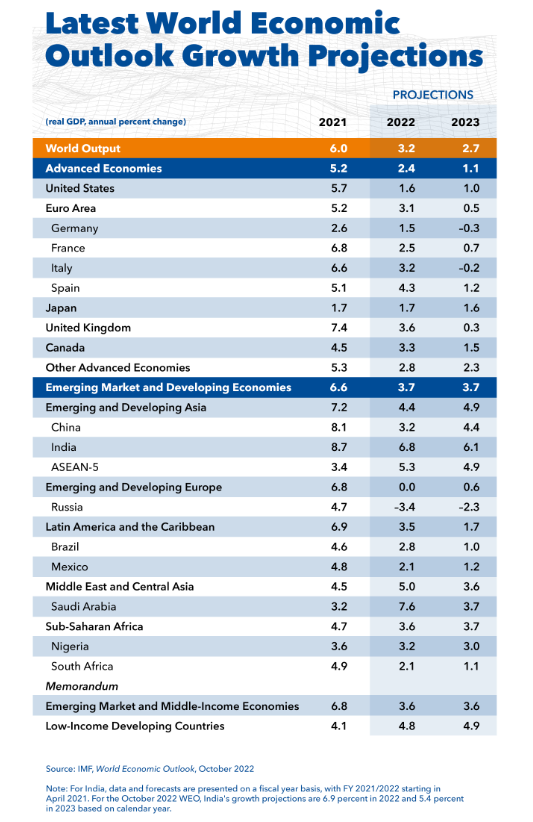 Pierre-Olivier Gourinchas is the Economic Counsellor and the Director of Research of the IMF. He is on leave from the University of California at Berkeley, where he is the SK and Angela Chan Professor of Global Management in the Department of Economics and at the Haas School of Business. Professor Gourinchas was the editor-in-chief of the IMF Economic Review from its creation in 2009 to 2016, the managing editor of the Journal of International Economics between 2017 and 2019, and a co-editor of the American Economic Review between 2019 and 2022. He is on-leave from the National Bureau of Economic Research, where he was director of the International Finance and Macroeconomics programme, a Research Fellow with the Centre for Economic Policy Research CEPR (London) and a Fellow of the Econometric Society.