IMF cuts Russia’s growth outlook to -8.5% in 2022, but warns figure could double if energy is sanctioned 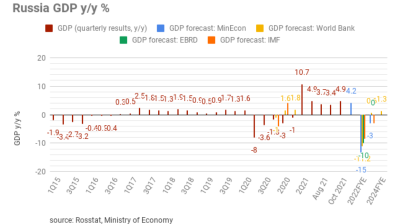 Russia’s economy will shrink by 8.5% this year and Ukraine’s could collapse by 35% as a result of the war, according to the IMF / bne IntelliNews
By bne IntelliNews April 20, 2022

The International Monetary Fund (IMF) estimates that Russia’s economy will shrink by 8.5% this year and Ukraine’s could collapse by 35% as a result of the war between the two that broke out at the end of February.

However, it could get much worse. This is already the second time this year the IMF has downgraded its global forecast as the situation in Ukraine continues to deteriorate. IMF chief economist Pierre-Olivier Gourinchas told a news briefing that including oil and gas exports in the sanctions regime could double Russia's GDP decline to 17% by 2023.

The EU imposed a fifth package of sanctions at the start of April that included a ban on Russia coal imports to the EU, the first time energy has been included in a sanctions package. However, even that move proved controversial, as Europe remains highly dependent on Russian energy imports that can not be easily replaced.

A sixth package of sanctions is already under discussion that will target oil exports, but here the EU will be even more cautious. While most of the details of the proposed measures have not been decided, based on comments so far, the new sanctions will target Russian refined oil product exports which make up a third of Russian oil exports, and these will be phased in to give member states time to make alternative arrangements. Crude exports from Russia, which make up the remaining two thirds of oil exports, the lion’s share of which go to Germany, will be put off for the meantime.

The IMF’s forecast comes on the back of even more dire predictions from the World Bank, which estimated that Ukraine’s economy will shrink by 45% this year as a result of the conflict, while Russia’s economy will contract by 11.2%.

The IMF also lowered its estimate for global growth by 0.8% to 3.6% in 2022 and 2023 as well as cutting that of the European Union by 1.1 percentage points. The UK was also downgraded and now faces slower economic growth and more persistent inflation than any other major economy next year.

Gourinchas said that if the energy bans were implemented then the outlook for global growth would be even worse. Higher prices, a loss of confidence and financial market turmoil from an energy embargo would cut another two percentage points off global growth forecasts.

The main danger to growth is from elevated inflation, driven up by soaring commodity and food prices, as well as repeated shocks to the supply changes. As bne IntelliNews reported, the Institute of International Finance (IIF) said that some Emerging Markets (EMs) are already experiencing “stagflation” – increases in prices coupled with falling production – as a result of the back-to-back crises of the last two years. A new energy crisis would only make this problem worse, say economists.

The war is predicted to further drive up inflation, the IMF said in its latest World Economic Outlook. The IMF said other risks to the outlook include a sharper-than-expected deceleration in China prompted by a flare-up of coronavirus (COVID-19) lockdowns.

The IMF also warned that if prices continue to rise it could also trigger wider social unrest in those countries most exposed to disruption to their food supplies by the war in Ukraine.

The IMF forecast average global inflation of 5.7% in advanced economies for 2022 and 8.7% in emerging market and developing economies, a jump of 1.8 and 2.8 percentage points from January's forecast.

"Inflation has become a clear and present danger for many countries," Gourinchas said.

Many central banks had already tightened monetary policy in anticipation of rising prices that will only depress growth further. Gourinchas warned that inflation expectations might become de-anchored, which would force central banks to tighten even more aggressively, which in turn would only stoke stagflation and lengthen its duration.

Finally, the IMF warned that the war has also increased the risk of a more permanent fragmentation of the world economy into geopolitical blocks with distinct technology standards, cross-border payment systems and reserve currencies, a move Gourinchas said would be a "disaster", reported Reuters.