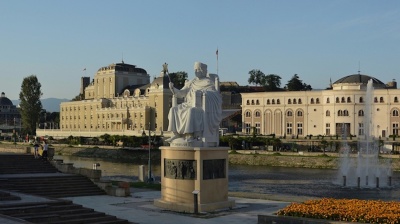 The International Monetary Fund (IMF) said on November 18 that EU-aspiring North Macedonia should continue with reform processes to narrow its large income gap with the EU. This was said in the IMF staff concluding statement of the 2019 Article IV mission.

The IMF said that although North Macedonia’s growth has been solid in the past two decades, it has not been enough to substantially narrow the income gap with the EU for which reforms are needed to improve the public administration, rule of law, and control of corruption.

“This should be complemented by efforts to build physical capital given infrastructure gaps and to boost human capital to address skills shortages and mis-matches, including through vocational education and training and more use of skill-enhancing active labor market policies,” the IMF said.

According to the IMF, GDP growth is expected to accelerate to 3.4% in 2020, reflecting a temporary boost from the 2020 budget and higher wages.

“Lower taxes and higher pensions and wages ― including public sector and minimum wages ― are expected to provide a further, albeit one-off, stimulus to consumption. Export and investment growth would remain robust but slow somewhat, reflecting weak growth in trading partners,” it said.

Bosnia to take out $75mn loan to develop the health system

The Bosnian Council of Ministers appointed a delegation for loan negotiations between Bosnia & Herzegovina and the International Bank for Reconstruction and Development at its session on July ... more

The European Bank for Reconstruction and Development (EBRD) is strengthening micro, small and medium-sized enterprises (MSMEs) and promoting international trade in the West Bank and Gaza, with a ... more

Serbian Finance Minister Sinisa Mali and the vice-president of the European Investment Bank (EIB), Lilyana Pavlova, have signed a financial agreement worth €200mn which supports small and medium ... more