Inflation expectations amongst Russia’s most vulnerable citizens ticks up to 12.9% 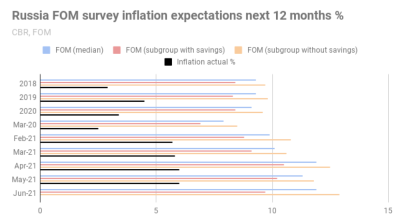 Russians are a lot more pessimistic about the outlook for inflation than the Central Bank of Russia. Inflation is currently 6% and the CBR expects this to fall back to 4% next year, but the poorest Russians think it will rise to almost 13% by this time next year.
By bne IntelliNews July 4, 2021

Consumer price inflation (CPI) has surged since the state of this year to reach 6% in May, according to the most recent data from the Central Bank of Russia (CBR). That is up from 5.2% at the start of the year and 3% in May 2020.

Economists thought that inflation had peaked in February or March, but CBR Governor Elvira Nabiullina is clearly worried, as inflation continued to climb in May and she said that she was almost certainly going to hike rates again in the July monetary policy meeting – and possibly by a full 100bp. The CBR has already abandoned its easing policy of the last four years and now it has been aggressively hiking rates in March (25bp), April (50bp) and June (50bp).

The earlier hikes have not had much of an affect on inflation and Nabiullina talked about inflation breaking through new barriers, leading her to get even tougher on bringing inflation under control. Prices have been driven up by rising food prices, but also by what she called “demand inflation” as opposed to monetary problems caused by too much cash chasing too few goods.

Broken supply chains have also contributed to the problem. Russia’s manufacturing PMI surprised analysts by falling in May, while it has rocketed to record levels in Central European markets thanks to the release of a year’s worth of pent-up demand. Russian panellists for the PMI reported they were struggling to meet orders and supply chains were making it hard to get inputs, which has also led to a spike in the producer price index of inflation (PPI) to 35% – its highest level ever.

The CBR commissions a monthly survey on inflation expectations from the Public Opinion Foundation (FOM) that divides society into three categories: the median result, a subgroup with savings and a subgroup without savings.

At the same time, FOM survey’s businesses expected inflation to rise to 27.5% over the next 12 months, up from under 20% the start of this year and in keeping with the expectations reported in the PMI survey.

Prices of bread and flour products in Kosovo jump by up to 50%
12 hours ago
Bank lending in Georgia up 12.9% y/y at end-September
12 hours ago
National Bank of Ukraine leaves key policy rate unchanged at 8.5%
14 hours ago
Kazakh industrial output up 2.7% in first nine months
4 days ago
Slovak unemployment rate at 7.09% in September
4 days ago