Inflation in Georgia eases to 12.3% y/y in September after eight months of gains 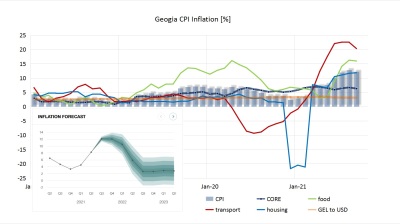 By Iulian Ernst in Bucharest October 6, 2021

Consumer prices in Georgia edged up by only 0.2% in September, with headline inflation easing to 12.3% y/y from the 12.8% y/y posted in August, statistics office Geostat has announced.

The National Bank of Georgia (NBG), which has hiked its refinancing rate by 2pp over the past year to 10% (the last hike occurred on August 4), said it expected that headline inflation would show a clear decline starting from Q1 next year when it would reach 10.5% y/y after staying above 12% y/y in Q3 and Q4 of 2021. Under the latest NBG forecast, inflation would drop below the 3% target to around 2% in Q3 next year - where it would stay until the end of the two-year forecast in Q2, 2022.

"Of course, we expected this [the inflation slowdown in September], we expect that inflation will have a downward trajectory in the coming months. From the second quarter of next year, the inflation rate will begin to decrease significantly. This forecast is made by the National Bank of Georgia. It is important that the NBG's plan, which envisages bringing the inflation rate closer to the target by the end of next year, is implemented,” Georgian finance minister Lasha Khutsishvili said.

Core inflation, calculated by excluding from the consumer basket food and non-alcoholic beverages, energy, regulated tariffs and transport (specific tariffs), eased to 6.3% y/y in September from 6.7% y/y in August.