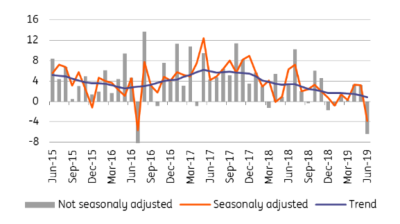 Industrial production fell by 6.4% year-on-year in June after more than 3% growth in previous months
By ING Think August 7, 2019

Industrial output fell by 6.4% year on year in June after over 3% growth in previous months. Though subject to calendar effects and other one-off factors, the weaker result also underlines that Czech industry is not immune to the German industrial slowdown.

Weak growth in June was partly due to calendar effects, as there was one less working day in the month compared to June 2018. However, even adjusting for this, industry would have fallen by 3.8% y/y, the weakest rate since July 2016, when production was interrupted by holiday shutdowns. In addition to the calendar impact, the higher base from last year also played a role, although the June figure was still significantly below market expectations of -2.6% y/y.

The industrial slowdown wasn't just driven by manufacturing, which declined by more than 3% y/y (working day-adjusted), but also by a decline in mining and quarrying (-11%) and energy production (-6.5%) (see chart). Still, there was a noticeable drop in output in almost all the major manufacturing segments, except for rubber and plastic products. Car production fell by almost 8% y/y, while in the previous three months growth surprised rather positively, averaging around 5% y/y. Also, new orders fell by almost 10% y/y in June after a favourable April and May, while foreign orders slid by 11% y/y.

Some one-off factors and shutdowns played a role

Although industry was expected to weaken in June, today's result ​​surprised on the downside. In addition to the aforementioned calendar effects and a higher comparison base, some one-off shutdowns in the automotive industry might have played a role, as these were mentioned by some respondents in the June PMI survey. There was probably also some delayed impact from the global manufacturing production slowdown, which until now has been relatively muted in domestic industry.

Stagnation of industry this year

While the June data may appear weaker than it actually is, it's a reminder that domestic industry is not immune to developments abroad and the slowing German economy. Risks from abroad remain significant, which will sooner or later affect the domestic economy. Due to the weaker June, average industrial growth in the first half of this year was just barely positive, but based on the recent negative development of leading confidence indicators, stagnation of industry this year would still be a positive result. The June rebound in German new industrial orders provides some small relief, however. 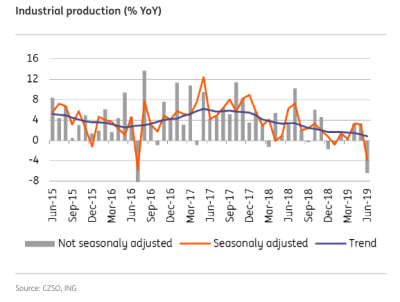 In 2020, Russia managed to limit the federal deficit at 3.8% of GDP, thanks to better-than-expected revenue collection, one-off proceeds of 1.0% of GDP and a persistent spending backlog of 1.0% of GDP.

ING: Russian corporates are back to foreign debt redemption in 2020

Russian corporates reduced foreign debt by $11bn in a tumultuous 2020 after a steady 2019. Still, with 89% of the debt refinanced, foreign debt redemption is not a material pressure factor for the ruble.

The Mongolian PM's resignation was a stirring illustration of public accountability and shows why the country is proud of its democracy, according to Antonio Graceffo.

ING: Russian budget’s modest deficit leaves fiscal room for 2021
1 hour ago
ING: Russian corporates are back to foreign debt redemption in 2020
22 hours ago
COMMENT: Mongolia is an island of democracy
1 day ago
ING: Russia balance of payments: supportive of ruble in the near-term, but risks for 2H21 mount.
6 days ago
ING: Growth in the Balkans: from zero to hero again?
12 days ago