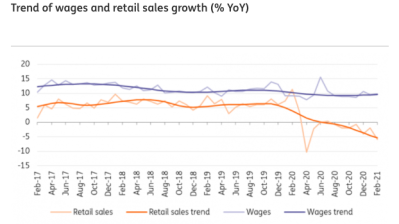 Wages in high value jobs are growing faster than expected, while low wage jobs are being cut
By Peter Virovacz Senior Economist for ING in Hungary May 10, 2021

Here we go again with yet another upside surprise when it comes to labour market statistics. Yesterday’s unemployment rate showed an unexpected improvement and after the January upside surprise, wage growth came in higher in February. Wage growth didn't just surprise on the upside, it accelerated compared to January despite the significantly lower minimum wage increase which kicked in in February. The 9.8% year-on-year growth of average gross (and net) wages in February was remarkably sound amidst a crisis.

The strong earnings figure remains puzzling, although technicals are playing a role here. Based on the institutional employment statistics, the number of employed rose around 0.7% month on month. However, this improvement came from significantly higher demand for labour in high-earning sectors (IT, finance etc.), while low-earning sectors were still suffering from the closure of in-person activities. So this composition effect is affecting the average wage level in a positive manner. However, this in itself hardly explains the near double-digit wage growth.

What could explain this is the ongoing public sector wage settlement. Due to planned wage rises in certain government segments – including pay rises for doctors, judges and prosecutors, and employees of nurseries – the growth of average wages in the budgetary sector (13.5% y/y) exceeded that of the national economy in February.

In addition, there are green shoots in the private sector too: wage growth in the private sector came in at 8.9% y/y on average, showing an acceleration compared to the previous month. This is mainly due to the stronger salary increase in agriculture, mining, construction, retail, finance and real estate sectors.

Looking forward, we still expect a softening in the average wage growth in the coming months. This should come from the private sector, as the positive impact of public wage settlement will be with us for the whole year. Moreover, we see the reopening as massively increasing the number of low-earners (in in-person activities) in the labour market, translating into a negative composition effect. In 2021, we expect official wage growth of 7% on average. 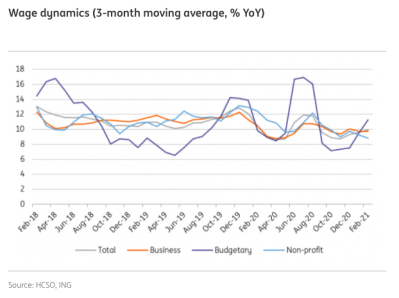 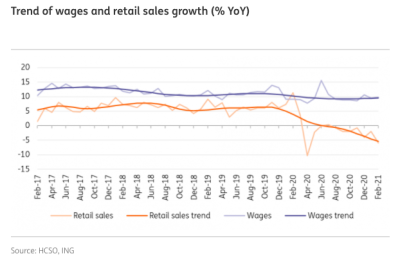 Hungary’s most powerful oligarch says he is just a lightning rod for attacks on Orban
ING: So what is a greenium and how do we get to it?
COMMENT: Time to end Putin's impunity

It's the anniversary of Operation Barbarossa on June 22, when Hitler launched his surprise invasion of the Soviet Union, completely catching Stalin unawares. The ultimate victory over the Nazis has become a centre-piece of Putin's Russia.

The Ryanair incident on 23 May was as much a bellwether for the status quo in Belarus as it is a geopolitical catalyst.

The price faced by Russia for aggression must be too high for the Kremlin to countenance, and this is the message that Biden should deliver to Putin – and act upon.

RIMMER: Unhappy anniversary: Operation Barbarossa
5 hours ago
THE VIEW FROM MITTELEUROPA: Surviving on life support – Belarus, sanctions and path-dependency
1 day ago
COMMENT: Time to end Putin's impunity
4 days ago
COMMENT: CEE national recovery and resilience plans – the focus, the gaps and what comes next
5 days ago
MOSCOW BLOG: Primary rehearsal
8 days ago