ING: No brake on the Hungarian inflation train 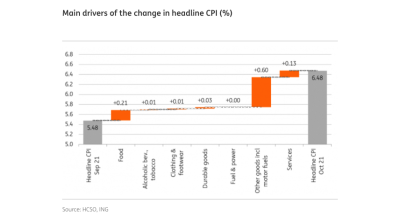 Despite heightened expectations, October inflation was a significant upside surprise and ING has upped its forecast for inflation this year.
By Peter Virovacz is a Senior Economist with ING in Hungary November 9, 2021

Inflation is increasingly looking like a runaway freight train without working brakes. The market adjusted its inflation expectations after the 5.5% reading in September, only to be surprised yet again. After a 1ppt acceleration, headline inflation came in at 6.5% year on year, higher than any of the individual economist forecasts. This time, we can’t lay the blame on the base effect, as month-on-month inflation was at 1.1%. Although there are some surprises, the majority of the acceleration stems from fuel. 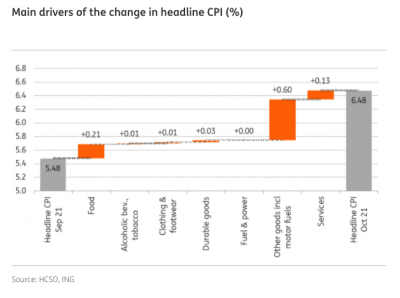 Hungarian fuel prices in nominal terms reached record high levels in October. Monthly inflation in fuel was at 7.3%, translating into a 30.7% y/y price increase. This impact was responsible for 60% of the acceleration in headline inflation.

Inflation in food came in 0.8ppt higher at 5.2% y/y in October. Import products like coffee and tea are showing significant price increases, as are fresh fruit and vegetables. However, the elevated producer prices are spilling over into processed food prices too. Thus, second-round effects have already arrived, affecting core inflation.

Having talked about imported inflation, we need to mention price changes in durable consumer goods. On a monthly basis, the 0.7% rise translated into a 5.4% y/y reading, the highest since 2009. The rise in industrial producer prices caused by elevated transport costs, global spare parts shortages and labour shortages have been showing up in consumer prices.

Inflation in services used to decrease in October on seasonal factors, but not in 2021. The monthly price change was at 0.4%, thus the y/y change moved up to 3.7%. Transport, cultural and leisure activities mainly contributed to the rise in inflation, but the monthly decline in prices of holiday packages was also much smaller than usual. 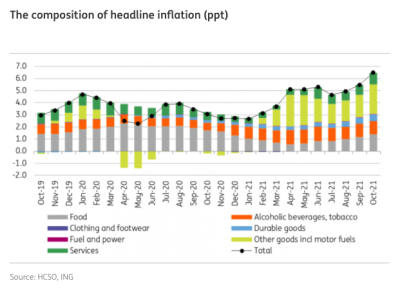 In all, there is widespread inflation pressure, with non-core elements, shortages related to core goods and services, and second-round effects all in play. As a result, it hardly comes as a surprise that core inflation rose by 0.7ppt to 4.7% y/y in October. The further rise in underlying price pressures is also seen in the National Bank of Hungary's underlying indicators. Core inflation, excluding indirect tax, sits at 4.7% y/y, while so-called sticky price inflation moved up to 5.5% y/y, matching the level last seen in July 2004. 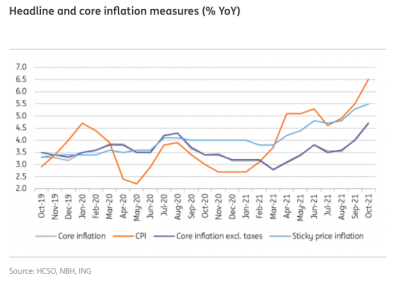 We revise our inflation outlook upwards

Today's data significantly exceeded the short-term forecast published in the NBH's September Inflation Report. It is almost assured that inflation this year and next will be higher than outlined in September, which may mean a delay in reaching the inflation target if the NBH does not deviate from the interest rate path behind the forecast. In the wake of the October inflation reading, we need to update our inflation forecast to the upside. We see the 2021 average inflation rate at 5% and we expect an average yearly price increase in the 4.5-4.7% range over the next year.

When it comes to monetary policy, we see an increased chance that the NBH will deviate from the 15bp step sizes seen in the past two months and will set itself up to raise interest rates at a stronger pace in light of today's data. Moreover, moves at other regional central banks are also putting pressure on the Hungarian central bank. The fact that core inflation has now approached 5% suggests that temporary effects are transforming quickly into second-round effects. Based on all this, it is more and more likely that a stronger pace of interest rate increases may be necessary to tackle inflation issues over the monetary policy horizon – a possibility which has already been mentioned by the central bank's vice-governor.

Ukrainian President Volodymyr Zelenskiy is swimming in waters infested with the sharks of geopolitics where everyone has a view on Ukraine, but don't always ask his opinion. And he is trying to keep his head above the surface.

The US Fed has not increased interest rates, just talked of increasing rates – not even by that much — and global stock exchanges lost $4.2 trillion in week. How can the Fed kill off the current high inflation without crashing the economy?

RAGOZIN: Zelenskiy swimming in the shark infested waters of friends and foes
1 day ago
NEMETHY: Is monetary tightening the cure for inflation?
1 day ago
ASH: Russia escalation cost/benefit
3 days ago
HOMANS: Former President Petro Poroshenko in the dock (sort of)
9 days ago
RIMMER: Turkey - Let nothing astonish you
9 days ago