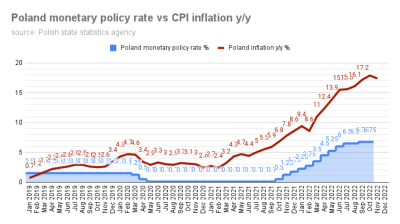 The Polish central bank says that its inflation peak is still ahead of it but more rate hikes are unlikely for the moment. / bne IntelliNews
By Adam Antoniak senior economist at ING, Rafal Benecki ING’s chief economist for Poland December 9, 2022

It's not official, as the National Bank of Poland Chair, Adam Glapiński, didn't bring the hiking cycle to an authoritative end. But recent policy actions and statements confirm it is indeed over. We expect no changes to NBP rates this year, but we are more cautious about the mid-term inflation outlook than the central bank.

The MPC is not ending the rate tightening cycle.

During a press conference, National Bank of Poland President Adam Glapiński said the MPC has not decided to end the interest rate hike cycle, but in our view, it has effectively been completed. He said he believes that 'the level of core inflation is not a cause for concern'. We think, given the Council's current reaction function, the chances of interest rate rises in the coming months are minimal.

Glapiński, referring to November's local and global outlook communiqué, reiterated that the international situation is deteriorating and that a recession is very likely in Germany. Glapiński said Poland isn't threatened too much by recession, although GDP growth may fall to around 0%. He didn't directly refer to third-quarter GDP structure data, which points to a weakening of consumption.

The NBP president pointed out that there are signs of global disinflation. However, Poland's inflation peak is still ahead of us. We should see that in January or February due to an increase in regulated prices. But it should start to fall 'steadily and rapidly' by the second quarter of 2023. The return of inflation to the range of permissible deviations from the NBP target will not occur until 2025. But by the end of 2023, the situation will be 'under control', and inflation will fall to single-digit levels. Importantly, the President – rightly, in our view – did not attach too much weight to the fall in inflation in October, being aware that this is not yet a turning point and that the local peak is still ahead of us. (chart)

Glapiński doesn’t share market expectations for rate cuts at the end of 2023. He stressed that the NBP has not completed the interest rate hike cycle, and it remains on hold. We expect to hear more on that in the MBP's March projection.

The NBP President's declarations about a pause in the cycle are of little importance now. In our view, the cycle is effectively over, even if the Council has not formally made such a decision (in fact, it may never happen). Prof Glapiński is sticking to the scenario outlined in the latest projection, assuming a peak in CPI in 1Q23, then a fall below 10% year on year at the end of next year, while the domestic economy avoids recession.

Other elements of the president's statement indicate some level of caution: Glapiński does not see room for rate cuts at the end of 2023 and draws attention to risks related to food prices, the pro-inflationary impact of anti-inflation shields (introduced by the government), the side-effects of excessive regulation of prices, persistent inflation in food components, and the uncertain commodity market.

In our view, core inflation will be persistently high in 2023, and we also see a significant inflationary overhang associated with a broad freeze in energy, gas, heating and fuel prices. This means that there is still a risk of significant increases in energy prices for large enterprises in 2023 and price rises for retail consumers in 2024.

Poland’s PiS set to clear major hurdle in quest to wrestle money out of EU
bneGREEN: CEE countries need to invest in more solar and wind to break their Russia energy dependence
NEMETHY: How the Battle for Ukraine may change Europe

ING: Hungarian retail sales suffer from record inflation
20 hours ago
ING: Romanian consumers shrug off pessimism into year-end
1 day ago
CENUSA: Bringing Ukraine, Moldova and Georgia closer to the EU: a multi-speed progress.
1 day ago
NEMETHY: How the Battle for Ukraine may change Europe
1 day ago
COMMENT: The new Cold War will be different, and not only because of China
2 days ago