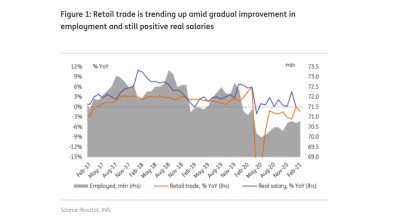 Russian consumption surprised on the upside in February, responding well to the budget support and gradual improvement on the labour market. This adds credibility to the hawkish stance of the CBR for now. Meanwhile, our longer-term concerns regarding lacklustre production and high dependence of household income on the budget did not evaporate.

Russian consumption statistics for February 2021 came in weaker than January – largely due to the high base effect of leap February 2020 – but still higher than most of our and consensus expectations. Retail trade dropped 1.3% year on year vs. our forecast of -2.5% amid a decline in the unemployment rate by 0.1 percentage point to 5.7%, while real salaries managed to show a 0.1% y/y increase vs. our forecast of -1.2% y/y. Given the lack of banking sector data available for cross-referencing, we have the following preliminary conclusions.

Improvement (adjusting for the calendar effect) in the retail trade dynamic chimes with the recent statement by the Central Bank of Russia (CBR) indicating a faster-than-expected recovery of local demand, also supported by the delayed re-opening of foreign travel.

We would also add that this recovery corresponds with the recent pick-up in budget spending, which is now showing a high growth rate of 24% y/y on a 12M trailing basis and is recently focused mainly on non-pension social benefits. We continue to anticipate that the April revision in the budget draft will result in additional social spending being added.

Labour market conditions also seem to be gradually improving, though not rapidly. The number of employed has recovered to 70.8mn, which is still 0.6mn below the pre-coronavirus (COVID-19) level. Real salary growth of 0.1%, positive despite the rapid pick-up in CPI to 5.2% y/y in January, still suggests that the 4.6% y/y spike last December was a one-off event, most likely related to front-loaded bonus payouts ahead of the increase in taxation for high earners.

The producer response to accelerated budget spending seems to be more restrained. To remind, industrial output showed little improvement in February, and neither did the construction sector, which continued to show a flat performance outside the booming housing construction sector. Meanwhile, the recent announcement by the Finance Ministry on the likely investments of RUB1 trillion ($13.5bn) from the National Wealth Fund in 2021-23 into the local infrastructure projects might add some optimism in the state-driven sectors going forward.

The recovery in household consumption lends credibility to the recent CBR statement, that the recovery in local demand adds to near-term inflationary risks and requires a more hawkish approach. Meanwhile, the lack of a noticeable improvement in the income trend, its high dependence on the fiscal support, as well as the lacklustre performance on the producer side remain challenges to a robust recovery in the overall activity in the longer term. 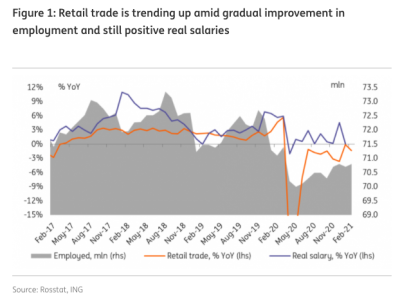 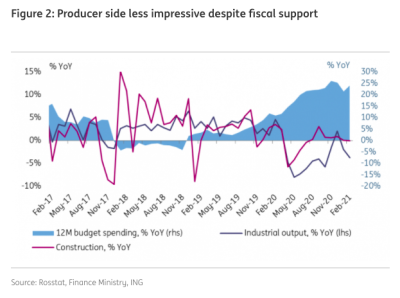