The value of the ruble to the dollar has surged to RUB71 to the dollar recently, a level most economists were not expecting to see until the end of this year. Russia's triple surplus and the rising price of oil are pushing the ruble along. / bne IntelliNews
By Dmitry Dolgin chief economist Russia at ING in Moscow October 12, 2021

Russia's exceptionally strong current account surplus helped the ruble outperform its peer currencies in 3Q21 and is likely to keep doing so in 4Q21. As a result, we see USDRUB appreciating to 70.0-71.0 in the coming month. For the medium term, fast local capital outflow and global $strengthening should be a factor limiting ruble appreciation.

Russia's current account recorded the largest ever quarterly surplus of $40.8bn in 3Q21, exceeding our $32bn expectations and hitting the top of the consensus range. We take the headline print positively and have the following observations:

Meanwhile, import growth was restrained on both the goods and services segments (Figure 1), reflecting still limited outward tourism and the moderation of merchandise imports after a very strong spike in 2Q21.

Still, despite the moderation, merchandise import growth at 30% year-on-year in 3Q21 appears elevated relative to the exchange rate performance: even though the ruble continued strengthening to €(EU accounts for 1/3 of Russia's imports) and USD, by 3Q21 EURRUBand USDRUBhave only returned to levels seen in 3Q20 (Figure 2). One explanation to this dynamic is the substitution of foreign travel with consumption of imports, in addition to some recovery in local investment activity.

Taking into account the trends in the non-fuel sector, expected $75/bbl Urals price for 4Q21 and assuming increase in export volumes, we see the 4Q21 current account surplus in the $40-45bn range, suggesting a full-year figure of c.$125bn, or c.7.5-8.0% of GDP. 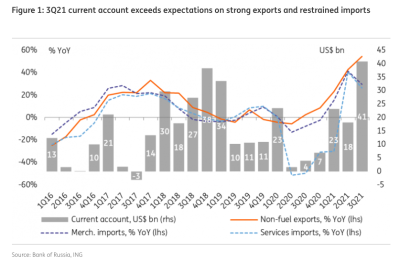 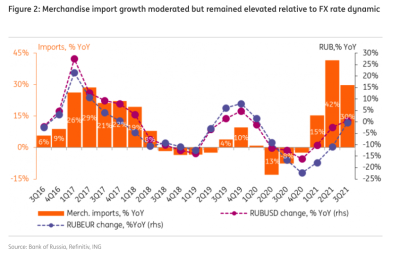 Looking at the broader balance of payments picture, it appears that the current account surplus was the key driving force behind the ruble's positive performance in 3Q21 vs. $(Figure 4) and peers (Figure 7).

3Q21 was also a successful quarter in terms of portfolio infows into the local currency public debt market (OFZ), which were close to $6bn after negative $4bn in 1H21. This recovery was supported by the toning down of Russia's foreign policy tensions, hawkish central bank, and a generally calm mood on the global debt markets, which however proved fragile after the tightening in the Federal Reserve rethoric caused a spike in UST yields and led to more bullish $expectations.

Our biggest concern and a major drag on the ruble is the local private capital outflow, which picked up to $33.9bn in 3Q21 to $58.9bn for 9M21 ($69.5bn over 4 quarters). The foreign debt data, that allows a detailed analysis of the capital flow structure, will be released on 13 October, but the preliminary numbers show (Figure 5) that after a brief improvement in 2020, the capital outflow structure is back to its usual focus on accumulation of foreign assets.

Looking deeper into the foreign asset flows (FIgure 6), one can see a return to standard outward FDI of around $30bn per year accompanied by a comparible accumulation of more liquid foreign assets. The latter may suggest a potential for reversal in case of more favourable conditions for the capital flows, but the catalysts for such a move remain incertain.

The overall balance of payments picture supports our take that the private capital outflow remains a factor limiting ruble's appreciation in the medium term. The structure and dynamics of the capital account point at a low appetite for capital locally, which combined with external limitiations (foreign policy, global risk mode) keeps the ruble undervalued, making it continuously favourable for trade balance. A mirrored shrinking of the current account surplus and net capital outflow under more or less stable exchange rate would be a sign of a reversal in the trend. 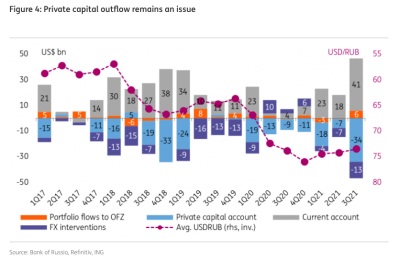 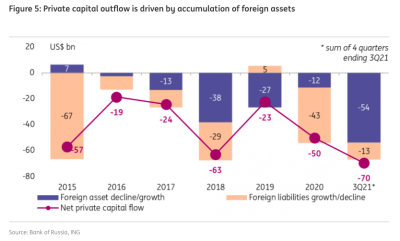 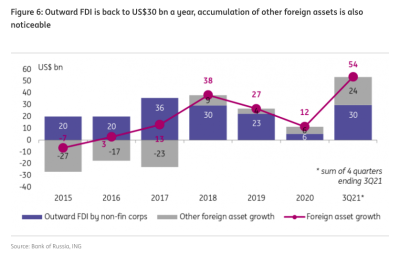 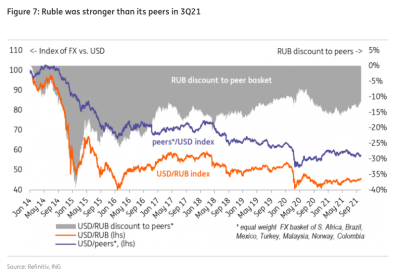 Near-term ruble outlook improved, but ruble's stabilisation at the lower bound of the USDRUB70-75 range is an optimistic case

An exceptionally strong 3Q21 current account prompts us to improve our full-year outlook by around $30bn to $125bn in 2021. Thanks to that, we now see a possibility of ruble appreciating to 70-71 in the coming 4 weeks and see potential room for improvement of our year-end target of 73.0. Taking into account partial sterilization of the current account via FX purchases, ruble fair value should be improved by USDRUB2.0, all else being equal. Nevertheles, ruble's stabilisation at the lower bound of the USDRUB70-75 range in the medium-term remains an optimistic scenario, requiring moderation in the private capital outflow and stabilisation of $to major currencies, none of which is part of our base case at the moment.