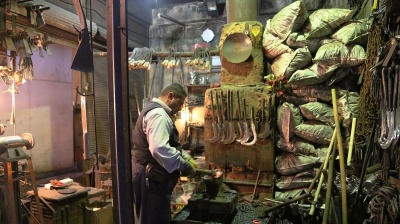 Blacksmith at work in the old town of Sur in Diyarbakir province.
By bne IntelliNews January 14, 2020

Turkey’s unemployment rate seems to be coming down thanks to the economic recovery also finally making its way to the labour market. Unemployment had been showing signs of improvement since early 2018, but was seen stabilising in August and then recovering again in September. However, October data confirms a new downtrend with a drop to 13.6% (on a seasonally adjusted basis) from 13.9% a month earlier.

The number of unemployed people recorded the third monthly drop in a row, though remained high at 4.44mn, well above the average seen in 2018. The monthly decline in the unemployment rate is attributable not only to improving job creation but also a relatively muted labour force participation standing at 52.9%, significantly below the all-time high at 53.5%, recorded in late 2018. 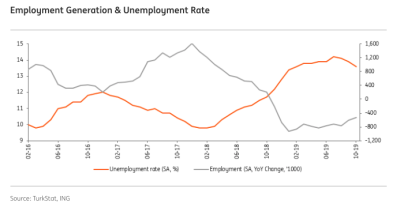 In the sectorial breakdown, all non-agricultural sectors contributed to job creation, while industry posted the highest monthly gain since February 2014 at 120k, followed by services (49k) and construction (45k). Recovery in construction that received the major hit from the shock in 2018 is also gaining pace, with the monthly gain the strongest since the end of 2017. Services also maintained strength in the number of new jobs, which has been quite positive in the last three months. On the flip side, agriculture has lost 92k jobs - the worst monthly figure since March 2017.

Overall, improvement in the labour market is now more evident with a downtrend in the making in the last three months on the back of economic recovery and support from public sector hirings. The recovery will continue with accelerating GDP growth, though the process will take time given the challenges the corporate sector has been facing. 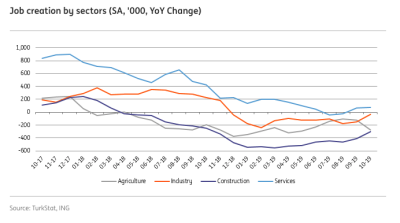 ING: Russian budget spending plays catch up in January
1 hour ago
TRACE: A closer look at corruption risk in the western Balkans
7 days ago
ING: Poland's growth slows sharply and the outlook is poor
18 days ago
ASH: Putin moves from "Fortress Russia" to "Go for Growth"
19 days ago
AFC Capital: Uzbekistan’s antiquated banking sector must wake up to invest-to-compete principle
21 days ago