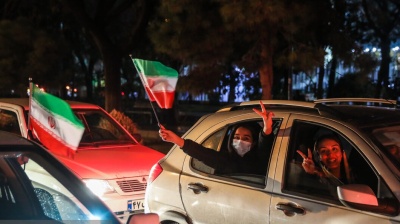 There were scenes of jubilation on the streets of Tehran after the match. / Ali Haddadi Hasl, Mehr News Agency.
By bne IntelIiNews January 28, 2022

Iran permitted around 2,000 women to watch the national football team’s match against Iraq in Tehran on January 28, a clash that saw the Iranians secure a place in the 2022 Qatar World Cup finals with a 1-0 victory.

The women were allowed into a women-only section of Tehran’s Azadi Stadium, along with approximately five times as many men. Stadiums have generally been off-limits to women in Iran since shortly after the country’s 1979 Islamic revolution, with Muslim leaders saying the ban is necessary to shield women from men’s profanity. Since 2018—when FIFA president Gianni Infantino met then president Hassan Rouhani, who promised him gradual reforms would take place in Iranian football—limited numbers of Iranian women have been allowed into stadiums to watch football matches on several occasions.

Striker Mehdi Taremi, who scored the winning goal that made Iran the first Asian country to qualify for the Qatar finals, told state TV after the match: "Even as there were special circumstances before the match, as you know, I’m glad that we managed to make people happy by making it into the World Cup." By "special circumstances", Taremi was referring to the neverending big debate about allowing women spectators into stadiums and restrictions on filling the stadium because of the ongoing COVID-19 pandemic.

Even as the day of the match dawned, there were fears that the match would be played before an empty stadium, with officials concerned about the growing wave of Omicron-variant coronavirus infections.

Spectators had to show they had received at least two doses of a COVID-19 vaccine before being admitted into the stadium.

Women entered and exited the stadium via a separate gate. A women-only emergency crew was on standby throughout the match for any medical incidents, while policewomen also watched over the women-only crowd section.

The Iranian team lost three players because of positive tests. Star striker Sardar Azmoun and captain Ehsan Hajsafi were among the trio who missed the match.

Goal-scorer Taremi was only able to make match thanks to a private flight that was arranged after he became stranded in Turkey by a storm.

There is a huge passion for football in Iran and the country increasingly produces players who are in demand in European leagues.

'In the blood and DNA'

"I have had a 35-year coaching career in seven countries, but haven't seen a place where clubs like Persepolis and Esteghlal matter as much as they do in Iran," Afshin Ghotbi, the nomadic Iranian-American coach who led Persepolis to the 2008 championship, was quoted as saying, adding: "These clubs are in the blood and DNA of almost every family in Iran."

Critics say, however, that the Persian Gulf League is being held back by state control and a consequent lack of professionalism in how Iranian football is run. Both Persepolis and Esteghal are owned by the Ministry of Youth and Sport. One big problem caused by this is that Asian Football Confederation (AFC) rules prohibit clubs with the same owner from participating in the Asian Champions League.

This month saw both clubs expelled from the 2022 Asian Champions League, the continent's top club tournament, by the AFC for failing to satisfy the necessary criteria covering sport, infrastructure, administration, legal and finance.

Dariush Mostafavi, the former chairman of the Iranian Football Federation, responded to the news by telling Iranian state TV: "The whole problem today is the presence of politics in football."

Iran may be heartbeat away from first unicorn
Iran the winner as Ukraine conflict repercussions divert European trade flows
At least five dead, more than 100 possibly trapped in collapsed building in Abadan, Iran